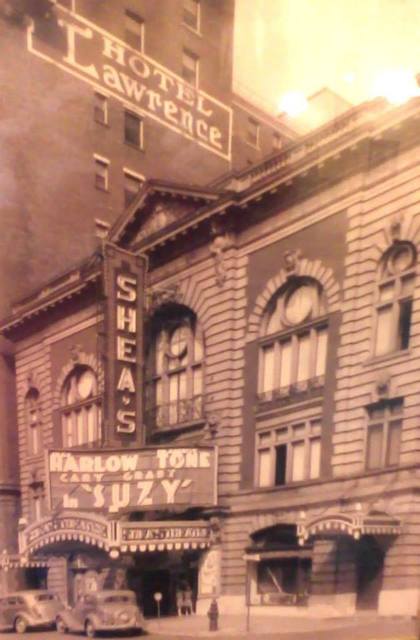 Originally opened in 1904 as the Majestic Theatre. It was renamed Perry Theatre in December 1921 when it was taken over by the Rowland and Clark Theaters chain. By 1941, it had been renamed Shea’s Theatre.

This theatre was a casualty of 1960s “urban renewal”. Those who have lived in Erie since at least the 1950’s or 1960’s will recall that this theatre was disgracefully torn down with the Lawrence Hotel and a popular candy company at 926 State Street.

What was really neat about Shea’s Theatre was that it had both a balcony and a mezzanine.

KeithJohnson: Long time between my post and yours, but “better late than never” as they say. So the Shea’s had both a balcony and a mezzanine! I’m sure my Erie friends will recall this feature, too. It’s a shame the Avalon Hotel now sits on that land, but at least the City of Erie has the Warner Theatre which was recently visited by Cass Warner Sperling, granddaughter of Harry M. Warner. Ms. Warner wrote the book on the Warner dynasty, Hollywood Be Thy Name.

I remember the Shea as having a small lobby and projection booth so high that “keystoning” was a problem. Cinemascope made it’s Erie debut at Shea’s. As a nine year old kid in 1954, I saw The Robe and was impressed with the big screen, which was curved and tilted to minimize the keystone effect. When this block was demolished in the 60’s, it also removed the site of the original Strand Theater which was next to Pulako’s. That theater was removed years before. Pulako’s was indeed located at 926 State Street.

Google “Erie County Historical Society” and click on “Photo Archives”. Pictures #2 and #16 on page 2 are of Shea’s. Picture #7 is of 10th St and on the far left is Shea’s which was then known as the Perry.

This was a beautiful theater it should have never been torn down. I remember when John F Kennedy came to Erie in 1960. He stayed at the Lawrence Hotel next to the Shea’s. I can still see him in front of Lawrence Hotel and The Shea’s Theater all gone for ever.

The Shea’s was torn down before I was born, but it does live on! I have the interior marque that my father pulled out before it was demolished. I can add a picture, if someone can tell me how to get it on here.

DesR: to add a photo to Cinema Treasures click on the “Photos” button (between “Overview” and “Comments”) above; on the photo page, scroll down and click the “Add New Photo” button; on the next page, click the “choose” button and select from the menu that appears the file of your photo wherever you have it stored on your computer. The file’s name should automatically appear in the adjacent box when you click on it. Adding a title and description are optional. Then click the “Upload Photo” button. License will default to “Creative Commons (Attribution)” but if you want a different one select it from the drop-down menu.

A twentieth century history of Erie County, Pennsylvania, by J. Miller, says that the Majestic Theatre was dedicated on January 28, 1904. It was designed by architect J. B. McElfatrick.

In 1907 the house was sold to Moses Reis, who continued the original policy of legitimate stage productions. By 1912, the theater had been transferred to the Shuberts.

The earliest mention of movies at the Majestic I’ve found is from the September 16, 1916, issue of The Moving Picture World, which said the house had been reopened by O. A. Potter with a policy of vaudeville and moving pictures.

This post at Old Time Erie says that Shea’s was also known as the Perry Theatre. The December 3, 1921, issue of Exhibitors Trade Review had an announcement that Rowland & Clark had recently opened their Perry Theatre in Erie. I haven’t yet discovered when it became Shea’s.

I’ve been doing a Google image search for theaters designed by J. B. McElfatrick to see if there are others resembling the Majestic, but I’ve found none that are very close. It’s remarkable how varied his designs were.