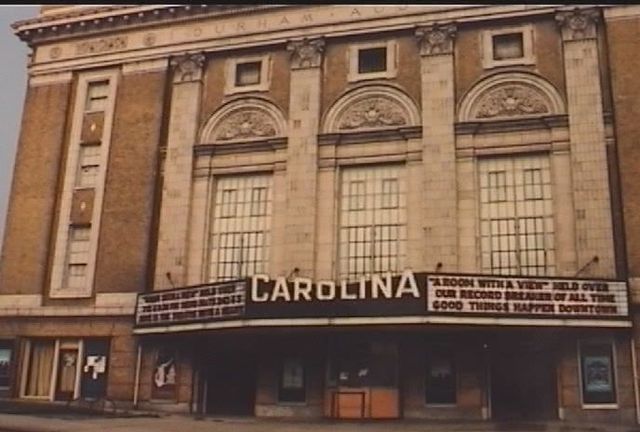 Opened on July 22, 1929, the Carolina Theatre’s main auditorium, Fletcher Hall (1,016 seats), a vintage performance hall, is a rich part of Durham’s history and is the last remaining of 13 original theaters in Durham.

Fully restored by architect Daniel P. Coffey and reopened in 1994, it is the only historic performance space of its beauty and intimacy in the Triangle. The complex, which is owned by the City of Durham and managed and operated by the Carolina Theatre of Durham, Inc., also includes two new state-of-the-art cinemas of 276 and 76 seats.

Contributed by Stephen A. Martin
Get Movie Tickets & Showtimes

For the record: All 4 of the Beatles films also played at the Carolina as well. From the record-breaking
“A Hard Day’s Night”, to the other Beatles movies like “HELP!”, “Yellow Submarine”,and “Let It Be” played to capacity crowds. They played first-run at the Carolina,because it was the outlet for a lot of films released under United Artists. And just like the Bond pics were huge boxoffice,of course UA re-released these Beatles films as double bills(one had a double feature of “A Hard Day’s Night”,and “HELP!” that was in re-release)which were huge boxoffice draws themselves.

sadly,the Theatre Chain I worked at,we never got UA product.I missed all the 007’s,but Dirty Harry made up for it.

The name of the architectural firm was Milburn, Heister & Company. According to the firm’s page at North Carolina State University’s Architects and Builders web site, it was founded in 1909 by Frank Pierce Milburn and Michael Heister, and Milburn’s son, Thomas Yancey Milburn, later joined the firm. The elder Milburn retired in 1925 and died in 1926, so the Durham Auditorium was probably one of the last projects he worked on.

Here’s a nice black-and-white photo of the Carolina Theatre, by Caroline Culler.

Can anyone confirm dates when the Three Stooges performed at the Carolina?

No, Chuck, by the autumn of 1963 most of the bookings of “Lawrence of Arabia” were of the general-release type.

Here’s a link to one of my retrospective articles that identifies most of the North American roadshow runs of “Lawrence of Arabia.”

Lawrence of Arabia: The Roadshow Engagements

Coate is right: By October-November of 1963,most of the bookings for “LAWRENCE OF ARABIA” were mostly general release. Cities like Durham,Greensboro,Wilmington,Asheville as well as Fayetteville,Winston-Salem,and Raleigh were general exclusive bookings…The smaller cities and towns in North Carolina didn’t get the film until April-May of 1964 as a general release,some two years after it’s initial release.

The only reserved seat engagement for LAWRENCE OF ARABIA was at Charlotte’s Carolina Theatre on September 25,1963. It was the only theatre in the state that presented it in full 70mm and Stereophonic Sound.

WEST SIDE STORY played at the Carolina Theatre in Durham as a general release in 1962 even though it was originally release in 1961.

This opened on July 22nd, 1929. Grand opening ad in the photo section