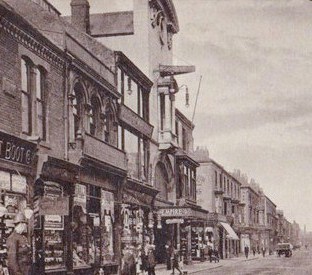 Built around 1885 as the Free Trade Hall, the architect was W.E. Milburn. It became the Empire Circus followed by use as the Imperial Roller Rink. Taken over by Richard Thornton who employed architects William Milburn & Thomas Ridley Milburn to convert the building into a theatre which was achieved in seven months. Richard Thornton booked it in conjunction with the Moss, Thornton, Stoll and Allen combine. The Empire Palace Theatre was opened on 13th December 1909 with a production of “The Toreador” performed by the West Hartlepool Amateur Dramatic Society. The following week on 20th December 1909, it commenced its career as a high class Variety theatre. Seating was provided for 1,818, with 731 in the orchestra stalls, 244 in the dress circle, with the remainder in balcony and gallery levels. There were two large boxes located beside the proscenium at dress circle level, each had 16 seats. Also known as the Empire Variety Theatre, as the name implies, it was designed for variety shows. A Bioscope box was installed from the beginning, and Kinetoscope films were screened as part of the programme from December 1909. By November 1910 it was in use as a cinema and was part of the Stoll moss Theatres chain. In February 1914 films were being screened on Wednesday afternoons, with live variety shows in the evenings. It was listed in the 1915 edition of Kinematograph Year Book. Live variety/music hall was its main programming into the 1920’s. In 1930 a Western Electric(WE) sound system was installed, enabling the Empire Theatre to screen ‘talkies’ on a Sunday, when live theatre performances were not allowed.

It had been purchased by the Essoldo Cinemas chain and was closed for three months for refurbishment, re-opening on 2nd April 1956 as a luxury CinemaScope cinema, with a re-run of Yul Brynner in “King and I”. The gallery and balcony levels had been closed for cinema use. After that run, it returned to live theatre use, but this was short lived and the Empire Theatre closed on 8th August 1959. One final show was performed on 16th November 1959 when the West Hartlepool Amateur Dramatic Society presented “Carousel”. In the early-1960’s it was converted into a bingo club. The building became derelict and in 1973, the Borough Council purchased the building. It suffered damage from a fire in 1975 and it was demolished later that year.

Memorabilia, details and a description of the Empire Theatre here:
View link

My mother worked there in the late forties and early fifties. She has a mine of information about the workings of the theatre—management, hiring of stars etc.Plus many amusing anecdotes to tell.

Is it possible to print off the above information underneath the photo, or is there a restriction?

My mother also worked there – must have been around the same time. Sadly my mother is deceased but I wonder if your mother remembers her – her name was Eva Lorraine ELENER. She often talked about Max Bygraves. Would be nice to hear from you.

I think that the date for conversion by Essoldo to a cinema was 1957, not 1956. The Empire appears to have operated as a full-time cinema for much of the thirties, with occasional weeks of variety. Films ceased, and it reverted to full-time variety from 5th September 1938.