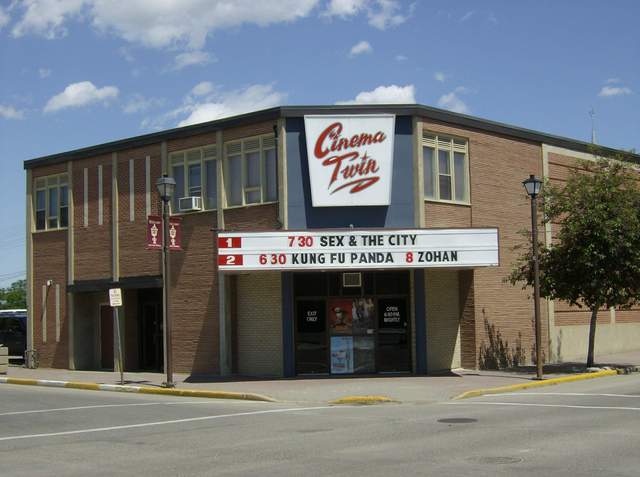 The Cinema was built and opened in 1954. The Cinema has a Roman brick facade, and has a corner location. It was equipped to screen CinemaScope films. All seating was on a single level, and at the rear of the auditorium under the projection box was a party room and a cry room. The Cinema was twinned in 1980.

Famous Players Canadian Corporation had NOTHING to do with this theatre. It was always independent!!

WOW I do not know who did the research on my theatre but they sure were not very good at it. This theatre was built in 1954 for Robert Dahl who was the mayor of Swift Current. It was built to be a movie theatre. It has always been an independant theatre. Famous Players never had anything to do with this theatre or any other theatre in Swift Current. In the 1970’s the Cinema Theatre, The Lyric Theatre and the Drive In were purchased by Roy Thom. He sold the Lyric Theatre after he twinned the Cinema Theatre in 1980. It later became a bar named Thumpers. He later closed the Drive In and sold the land to the East Side Church of God. The radio sound system was sold to the Drive in in kyle. He sold the theatre to me (Kathy Pratt) On April 1, 1988.

During the 50’s and 60’s the PLAZA THEATRE in SHAUNAVON got many many pictures ahead of theatres in larger markets like Swift Current because it was an associateof FAMOUS PLAYERS THEATRES!!