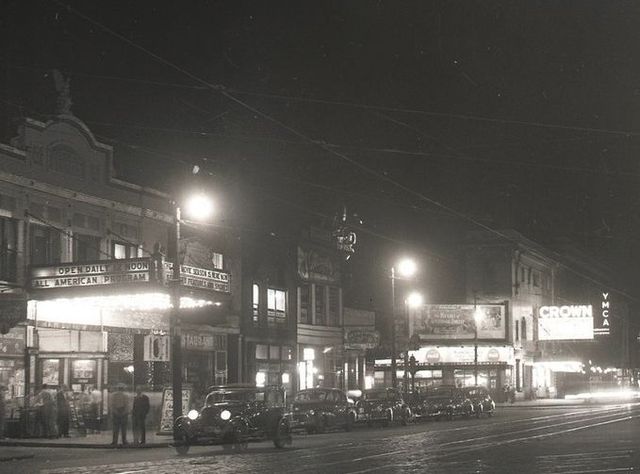 The 1918 Chopin Theatre, which could originally seat nearly 1,000, served the Wicker Park neighborhood as a movie house until the 1950’s, when it was converted into a bank.

In the late-1970’s, it a was turned into a disco, but after a shooting occurred on its opening night, it was closed.

It sat vacant and was scheduled for demolition in 1990, but at the last minute, the Chopin Theatre was rescued and transformed into a showplace for plays, poetry readings, film screenings and concerts. It also houses a theater workshop in its basement.

(….at the risk of sounding like I’m plugging this show….)

TONY CLIFTON live (after a fashion) now at the CHOPIN!

What makes this particularly interesting is who T.C. really is – Mr. Bob Zmuda, who some may be aware hails from the Humboldt Park neighborhood here originally himself.

So I can’t help but wonder if Bob is getting a special kick out of playing the CHOPIN of all places, where he probably saw flicks at (when it was last a cinema in the ‘50s) when he was a kid (I believe he’s old enough).

And I’ll close by stating I think his Clifton shtick is am absolute scream and I’ll be seeing it. Even if this is interpreted as a plug no-one should mind greatly because all the ticket proceeds go to the charity COMIC RELIEF, which Bob runs.

I think it is unlikely that this theater was ever called the Harding; the big Harding Theater (operated by B&K) just a few blocks away on Milwaukee opened in 1925 and was demolished in 1963. In addition there was a Harding Theater on E. 55th Street in Chicago that apparently operated from about 1918.

(the following repeated from photo comments)

this wknd fri-sat-sun the CHOPIN theatre is advertising as having some ‘Moving Sale’ open to the public:

that old northwest looking photo linked above i find a little interesting in that the triangle in the middle of the 3-way intersection appears essentially barren. admittedly it’s a dark night-time image. i know the milwaukee-dearborn subway began construction 1939 (or sooner) but was soon put on hold in favor of concentrating what wartime resouces there were on the state st subway construction (and the dearborn subway opening delayed to 1951). trying to peer down milwaukee avenue is a bit problematic in this photo since there’s so much lighting haze but i suspect what’s down there’s the marquee of another theatre The Paulina

I think that’s probably a sign for Wieboldt’s in the distance.

there’s more than one illuminated sign in the distance down milwaukee, and the further one could be for Paulina theatre. I remember weiboldts and its sign, my buddy dave worked there late ‘60s in their grocery dept.

Block Club Chicago story on the Chopin and its owners here.

Fundraiser helped save the Chopin.