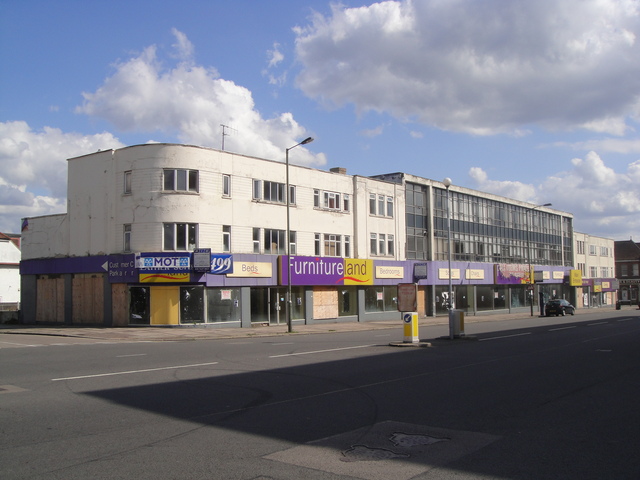 The Odeon Theatre was one of the original Odeon’s built for Oscar Deutsch’s Odeon Theatres Ltd. chain. It opened on 14th October 1935 with Jeanette MacDonald in "Naughty Marietta". Actress/film star Anna Sten appeared ‘in person’ and The Sommerfield Orchestra were on the stage. Located on the east side of High Road North Finchley, at the northern end of the main Finchley shopping district and verging on the boundry with the next neghborhood to the north, Whetstone.

The Odeon had a 270 feet long facade, taking the entire block which extended along the High Road between the corner of Mayfield Avenue and the corner of Friern Watch Avenue. Behind the facade, the auditorium lays parallel to the High Road and had a small car park at each end behind the shop units. The two wings of shops with flats above, were on each side of the central entrance. The entire facade was faced with cream faiance tiles.

Inside the auditorium, seating was arranged on a stadium principle, with a raised section at the rear, instead of an overhanging balcony. There were 878 seats in the front and 418 seats in the rear. There were four plaster fins in the centre of the ceiling which carried concealed lighting. Provision was made in the construction of the building to make space for an organ, but one was never fitted here.

The Odeon was closed by the Rank Organisation on 26th December 1964 with Elvis Presley in "Roustabout" and Peter Vaughan in "Smokescreen".

The building was taken over by Halls (Finchley) Ltd. as a garage and car showroom. The company were already well established in the building has they had operated out of one of the shop units since it was built in 1935.

The facade of the building was mainly rebuilt, and since the early-1980’s, it as used as a furniture store named Furnitureland. This appear to have closed in around 2006. In August 2009, there is a sign on the building stating the lease has been sold and it could be that the building will be demolished when the economic climate improves. It was demolished in May/June 2013 and a block of flats was built on the site in 2014.

I wish I hadn’t looked at the photo! What a sad demise of a lovely art deco building. I lived in Finchley Park, just round the corner, and was a regular visitor in the 1950’s and early 1960’s. They weren’t doing that badly – the place was jam-packed for Summer Holiday and Zulu, but of course, TV was gaining ground and perhaps closure was inevitable. But to replace it with “Furnitureland” – just how gross can things get!

It would be nice to some pictures of this cinema in it’s prime – maybe with some trolleybuses, buses, or Greenlines that all stopped outside the entrance.