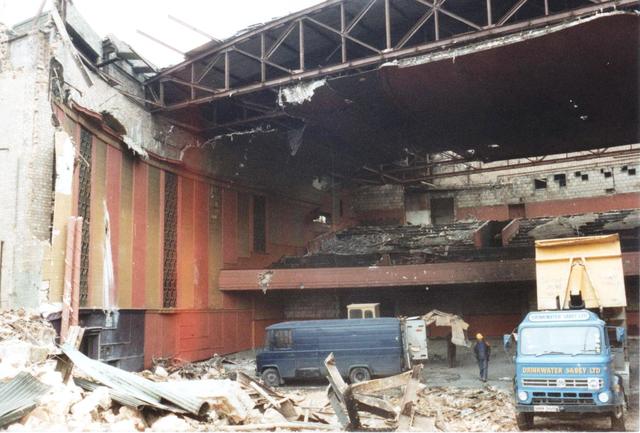 Located on a large island site of Tally Ho! Corner at 707 High Road North Finchley. Tally Ho! Corner was the terminus for the trams in this part of north London and in later years became the terminus for the trolly buses, which encircled the building. The site was created in the 1930’s for a road widening scheme and in May 1934 plans were approved for a 2,500 seat Dominion Cinema to be designed by well respected cinema architects John Stanley Beard & Bennett. This plan never got off the ground, and in July 1934, the site was purchased by Gaumont British Theatres.

The beautiful Gaumont Theatre was considered one of the chains finest cinemas. It opened on 19th July 1937 with Humphrey Bogart in "Black Legion" and George Formby in "Feather Your Nest" Actress Anna Lee appeared ‘in person’. The brick exterior had a semi-circular tower on the left-hand side. Half-way up the tower was an elaborate bas-relief carving in Portland stone, created by artist & designer Newbury A. Trent. Considered the finest of his panels that he designed for several Gaumont Theatre’s at that time, it depicted the shooting of a film, with lights, camera, director and actors. The mass of brickwork on the facade was broken by a large window which stretched across, just above the canopy level, and allowed diners in the 120 seat cafe/restaurant to view the street scene below.

Inside the auditorium, seating was provided for 1,390 in the stalls and 725 in the balcony, which only marginally overhung the stalls. There were nine elaborate light fittings hanging from the ceiling, and the lower side walls were paneled Mahogany wood. The style of decoration was described as ‘Modern Swedish’ at the time. The Gaumont was a very wide cinema, and consequently with its 53 feet wide proscenium, was well suited in later years to screen CinemaScope films. It was equipped with a Compton 3Manual/9Ranks organ which was located on a lift on the left side of the orchestra pit. It was opened by organist Fredric Bayco who was guest organist for a week from his base at the Dominion Theatre on Tottenham Court Road. There was a fully equipped stage, which was 36 feet deep, and a large stage house for scenery. There were six large dressing rooms and other smaller ones. The cinema had a large car park at the rear.

Always well maintained, to suit the rather up-market district of Finchley, with the downturn in cinema-going in the 1970’s, the balcony was closed off and the stalls re-seated with 831 luxury chairs. The Compton organ was played mainly on Sundays in later years, and was occasionally broadcast by the BBC. It was sold and removed from the Gaumont in 1967. It was installed in the Plough Inn, Great Munden, Hertfordshire, and was played regularly for many years. However in the early-2000’s new landlords took over the pub, and the organ was removed and is currently in storage.

The Gaumont was in excellent condition when it was closed by the Rank Organisation on 25th October 1980, with Michael Cain in "Dressed To Kill" as the last regular film. Then it bowed out with a late-night show of "The Last Picture Show" starring Timothy Bottoms, and "Monty Python’s…..And Now For Something Completely Different" starring John Clease.

The building lay unused for seven years, and it was demolished in February 1987. The Museum of London were given permission to photograph the bas-relief panels on the exterior, but despite efforts to save them, they came down with the building and were lost.

Developers promised a new building on the site which would include a banquet hall, twin cinemas and offices. But it was later found out that the Rank Organisation had put a restrictive covenant on the sale of the site, stipulating that it could not contain cinema use. The huge site then stood as an empty plot of land for the next 15 years. It had temporary use as an outdoor market and for car parking. In 2004, a new arts centre named Artsdepot was opened on the site. The building contains (in 2008/2009) a Bathstore on the ground floor at the location of the entrance to the former Gaumont.

sheer wanton vandalism of the type that has occured right throughout Noprth London.I have photos of it being bulldozed.Never been to the Artsdepot and never want to.

A vintage photograph of the Gaumont Finchley auditorium, possibly dating from its opening in July 1937:
View link

Thanks for the auditorium photo Ken, it was beautiful and shows how wide it was as mentioned by my mum. To my regret, I never went inside this cinema, going to the nearby Barnet Odeon instead. I witnessed part of the demolition of the Gaumont as captured by ‘Dushanka’s sad flickr photo set. What a loss.

I was back Finchley way today for a school reunion at Bishop Douglass in East Finchley and it got me all nostalgic for the locale I grew up including the Gaumont Odeon in North Finchley. My time was after Shamus’s as above as my family first came to the area in 1972 but I can remember so vividly the films we saw there.

First thing to note was that it was ENORMOUS, seating over 2,000 and the screen size was huge. I mean, even at the back of the cinema it almost filled your whole field of vision, but then there were also these huge big lobby spaces. By my time, the likes of the restaurant were no longer open, but what must it have been like to have been in that auditorim when films were supported by shows with dancers and orchestras. My goodness, at that time you really did enjoy a gala night at the movies.

I’m 50 now but every now and then I will dream that I’m back there and I rerun the films I saw then. My memory is faded perhaps but I know they included Bryan Forbes ‘The Slipper and the Rose’, ‘The Great Gatsby’ (possibly one of the last films shown with an intermission) ‘The Four Musketeers’.

It’s simply astonishing to me that no one had the wit to reinvent that cathedral of the motion picture. Maybe its a wonder that we’ve just about clung to the Muswell Hill Odeon, but special as it is, The Gaumont Odeon in Finchley was a palace. Even as a kid with so many of its areas closed off, you could see that; and as for Rank’s sneaky restrictive covenant? How shabby was that?

I better quite now before I burst an atery but before I leave let me link you to two pictures I’ve not seen before. One is a great view of the interior at its hey-day while the other is an excellent floor plan for the original building.

I’m a researcher/archivist on a project about the Gaumont Finchley and keen to speak to people who would like to share their memories about the cinema. Is anyone based in London that would like to meet for an informal interview? We are organising this in Finchley at 2pm on Thur July 10th but there will also be later opportunities.

Pls get in touch if you’d like more info
Thank you!

Sounds interesting Olivia – how do we get in touch?

Hello Olivia, I’m going to be working on the Arts Depot project about the Gaumont Cinema. It would be great if we could get in touch . My email is Thanks Jacky

hi my granddad Charlie foster used to work at the gaumont Finchley and sadly he has passed away but we have come across old photos of equipment and off staff and a souvenir brochure dated Monday july 19th 1937, if anyone is interested and collects this sort off thing, also would be nice to learn any information about my granddads life thankyou

I was Assistant Manager in 79-80 under GM Derrik Lumley one of the Best Rank Managers I ever worked with. Went on to New Victoria & Metropole MU in Victoria and finally Odeon Marble Arch

The stone reliefs survive and are built into a wall of an architectural salvage yard, near Borehamwood, as seen on Salvage Hunters season 15 ep4