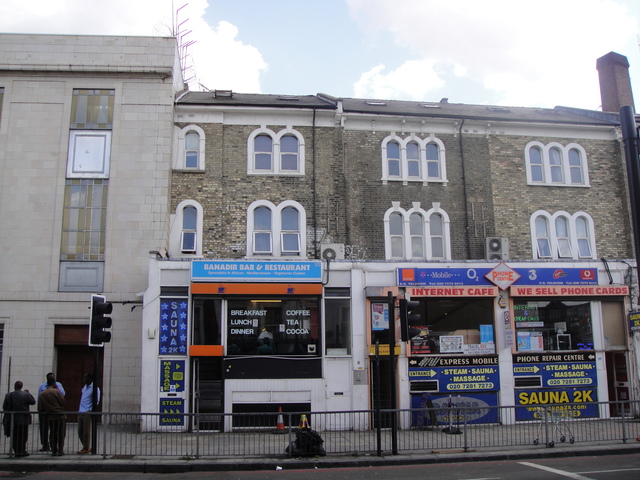 Located in the inner north London district of Finsbury Park. The is a terraced building that joins to the right-hand side of the famed Astoria Theatre. The Electric Vaudeville Theatre opened in December 1909 as a shop conversion, designed to the plans of the cinema architectural firm Lovegrove & Papworth. It was operated by Robert Hawkins and his partner Arthur Pitman. It was granted a Cinematograph Licence in 1910, to comply with new Cinematograph Licencing Act.

Robert Hawkins lost his partner and he sold the cinema to Selig & Isaacs in 1915. The Electric Vaudeville Theatre was closed in 1916, possibly due to conditions during World War I.

It reverted back to retail use, and for many years in the 1980’s and early-1990’s the building was empty and derelict. In recent years it has been converted into a sauna and a restaurant.

It was opened in December 1909 by Robert Hawkins and Arthur Pittman and could hold about 100 people. There are later references to it as the Bijou Picture Place and Bijou Theatre. Subsequent licensees were Walter Payne in April 1912 and Herbert Arthur Crane from January 1913. In 1913 it was going to be enlarged to bring the capacity up to 400 but the freeholder objected. Since the architect wanted to “pull the place down and start again” I am not surprised. Inspectors visited the property in March 1914 but the cinema had gone and the premises was a shooting gallery. Details from building case file at LMA.