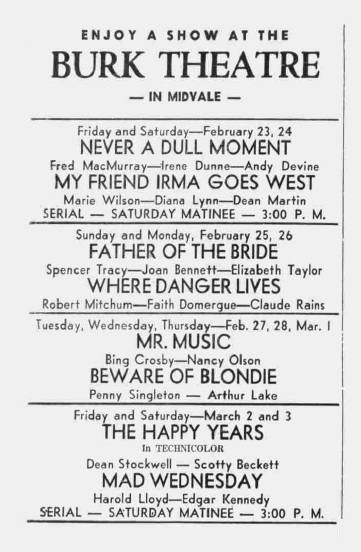 The Burk Theatre is located in historic downtown Midvale in the Salt Lake Valley. The theatre may have been built by a family with the last name of Burkinshaw. The theater was later known as the Gazebo Theatre and the Midvale Theatre.

Now the sign says something about the Comedy Shows running again. I drove by and read the sign on 8/25/04.

Hi, everyone.
My great great grandfather owned and operated the Burk Theater that is now the Comedy Circuit, as well as two other theaters, one in Sandy, and a short lived location in Riverton. If those responsible for this website would like more information, feel free to contact me.

I have a tape recording of my great-grandfather, Zachariah Brown, talking about how his father, Silas Brown, started the first movie picture theatre in midvale. Called it the alysian theatre (elision; probably spelled it wrong, but it sounds like it looks). It started in Zach’s mid teen years which would have been around 1915. The brown family ran this theatre as a family business primarily. Zach and his brother, John, learned how to run the machines as teenagers and helped sell candy during the change of the reels (i.e. which was about every 15-20 minutes). That’s all I know about it. Would be cool if someone else knew more information about this theatre and could help verify it’s existence. Figured someone on here might know something.
Thanks, Isaac Brown

My husband’s family – Burkinshaw-owned and operated the theater as recently as when my mother in law was a young woman. She worked there, married a son from the family, and eventually operated it. My husband grew up in that theater and I’ve learned interesting details from my mother in law about how the bidding process went on how theaters got their movies in those days (maybe similar to how it is even today?) because she had to constantly compete agains the bigger movie theaters for good movies. She was able to be the first the show Gentle Ben, but when the other theaters saw the lines at the Burk theater, they had the clout to be able to pull it from her. …a fascinating look into that world. It burned down more than once and I think after the last fire, it was sold, or something to that effect.

tburk133 I would love to contact you about the Burk. See if there are any pictures of the interior or exterior. Get any info on it.