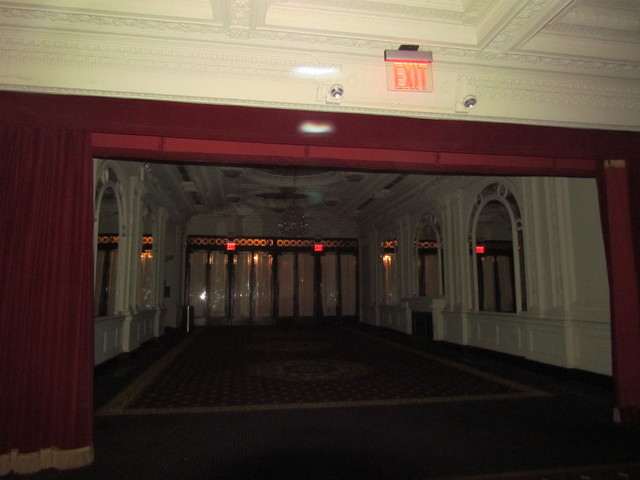 In 1903, Henry B. Harris opened the Hudson Theatre on 44th Street, becoming the first producer to build a playhouse on that street (its side entrance, on 45th Street, was originally for the use of actors only).

Built in a then-mostly residential neighborhood, the four-story theatre, with its fairly simple Italian Renaissance style facade, was anything but simple inside. A mix of several styles popular around the turn-of-the-century, including Beaux-Arts, Neo-Classical, and Neo-Renaissance, the Hudson Theatre was nothing short of stunning to its first patrons.

The auditorium could seat about 1,100, which included a pair of balconies and two sets of boxes on either side of the proscenium arch. The Hudson Theatre was liberally decorated with Roman-themed works, including friezes copied from Nero’s Golden House and the Baths of Titus over the proscenium and lining the walls of the lobby, respectively. Also, Tiffany glass covered the dome of the lobby ceiling and also faced the upper boxes and lower balcony.

Its black marble box office was decorated with bronze heads of the god Mercury as well as bronze trim around the window decorated in a floral theme.

The Hudson Theatre opened with a play starring Ethel Barrymore, which only ran a few weeks, but within a few years, the theatre began to have a number of successes, becoming one of the city’s premier playhouses.

Harris himself died on the Titanic, but his wife, who was among the last rescued, went on to run the Hudson Theatre herself until being forced to sell it during the Depression.

In 1934, the CBS network purchased the vacant theatre, and used it as a radio studio. However, by 1937, it had returned to legitimate use again, and a few years later, playwrights Russell Crouse and Howard Lindsay purchased the Hudson Theatre. In 1950, after a pair of successful long runs (“Arsenic and Old Lace” and “State of the Union”) the theatre was sold to NBC for use as a television studio. Among the many classic shows broadcast from the Hudson was “The Tonight Show”.

During the 1960’s, the Hudson Theatre frequently was dark, and even more frequently threatened with demolition, but live performances continued on and off until 1968, when it was acquired by the Avon chain of pornographic movie theatres, which continued to run it until 1976, as the Avon-at-the-Hudson. After adult fare, the theatre became just another second-run movie house, but only briefly, since by the end of the decade, it was closed.

Reopened in 1980 after a remodeling as the Savoy, a nightclub and venue for rock concerts, it never became popular and closed after a few years. During the mid-1980’s, the stage was used by developers to hold a full-sized model of a luxury condominium for a short time.

Fortunately for the Hudson Theatre, in 1987, the Landmarks Commission declared both its interior and exterior a landmark, thus when Harry Macklowe built a large hotel next door to the theatre, it could not be razed, so the former theatre was incorporated into the hotel, for use as a conference center and venue for special events, refurbished to its 1903 appearance by its owners, the Millennium Hotel Broadway.

In December 2015 the Hudson Theatre was taken over by the British based Ambassador Theatre Group and will become a legitimate Broadway theatre once again. They had taken over the Lyric Theatre (former Ford Centre for the Performing Arts) in 2013. After renovations & restoration had been completed, the Hudson Theatre reopened February 11, 2017 with the musical “Sunday in the Park with George”.

Very exciting, will be used as a new legitimate Broadway Theatre. http://nyti.ms/1IVfuyV

The Millenium folks did a marvelous restoration of the auditorium. I would think that only the techie stuff needs to be upgraded.

The permit is on the door dated January. Lobby is boarded over so nothing can be seen inside.

The Hudson reopens on February 11th with an all star revival of Sondheim’s Sunday in the Park with George.

Such great news. (I already have tickets.)) It seems to be the theatre created around the show FOLLIES.

First time I saw Follies was at the Winter Garden. Second time at the Belasco which they trashed to make it look authentic. Didn’t catch the last revival.

The new seats and latest restoration work is a win! This is now my favorite Broadway house.

Circa 1951/`52 photo added via Barbara Morrison. “The Kate Smith Hour” aired on NBC.