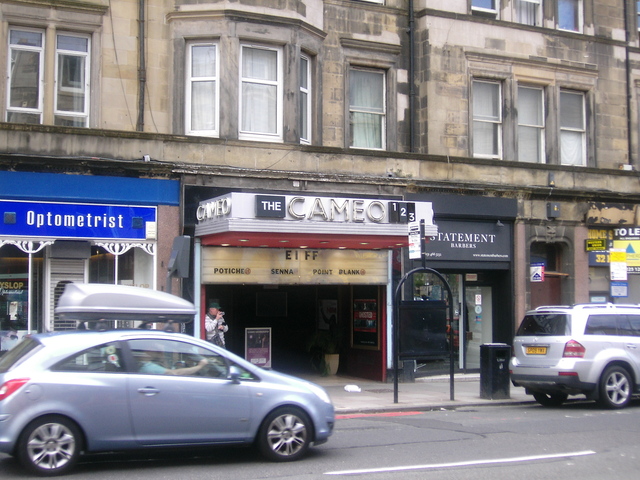 The Kings Cinema opened on 8th January 1914 and was located across the road from the Kings Theatre. The entry was converted from a former drapers shop, with the auditorium built behind existing shops on ground which had been occupied by a riding school. It was owned by Mr Barlett and he employed a ladies orchestra to accompany the first week’s films.

Recorded Cinemas took over in 1991 and they added two screens to the cinema which seated 63 and 77. In 1996 it was taken over by Oasis Cinemas and they proposed plans for a fourth screen.

On 1st February 2000, Historic Scotland designated the Cameo Cinema a Grade C Listed building. In 2007, this was upgraded to Grade B Listed.

Opened as the King’s Cinema on 8th January 1914 with a seating capacity of 650. It was re-named Cameo from 25th March 1949 becoming an art house cinema. By the mid 1960’s it had gone over to screening mainstream movies such as “Tom Jones” and seasons of Woody Allen movies. It closed with the double bill “Stir Crazy” starring Gene Wilder & “The Blue Lagoon” starring Brook Shields.

I have not located what it became after closing, but it is now re-opened as ‘woody’ states in his posting above.

I omitted the date for closing with the Stir Crazy/Blue Lagoon double bill, it was 11th September 1982. I have now found that the Cameo re-opened under new ownership on 16th August 1986 and continues today.

More information on the Cameo Cinema with photographs can be seen here:
View link

“The Cameo cinema has been put up for sale after its owners admitted plans to turn it into a superpub are likely to fail”. (The Scotsman)

I just learned of this terrible news from a friend. There are so few historic cinemas in Edinburgh I hope the campaign to save it succeeds (www.savethecameo.org). I have two blue velvet seats from the 1986 refurbishment and have fond memories of the place.

One of Edinburgh’s few remaining old cinemas, Cameo Cinema, built in 1914. However, in November 2005, the owners, City Screen:

Further details of the proposals for the Cameo were reported in the Edinburgh Evening News on November 22.

It is proposed to:

The Evening News also reported that an online campaign to save the cinema had received 82,000 hits by November 22, 2005

The proposals above have resulted in widespread opposition from people who fear they would result in the cinema being turned into a ‘super pub’.

It was reported on November 24 that proposals are being considered to rescue the Cameo and continue to run it a a cinema.

City Screen, the owners of the Cameo Cinema announced on November 30, 2005 to an audience of 250 protestors in the Methodist Hall at Tollcross, that in the face of growing opposition to their plans, they had decided to withdraw their planning application to convert their main auditorium into a bar.

The head of the Film Festival and Filmhouse confirmed that they would be willing to run the Cameo if a buyer could be found. However, Councillor Henderson said that Edinburgh City Council had no cash available to save the Cameo.

Here is another link with renovation news:
View link

Just as an update, owners City Screen eventually withdrew the planning application to convert the main auditorium into a restaurant/screening area. Without a live planning application, Historic Scotland were then able to upgrade the cinema’s listed building status to from Category C(s) to Category B – being situated in the back court of a tenement, this has effectively upgraded the listing of the entire tenement on the grounds of the cinema auditorium within it. Hopefully, this will better protect the cinema from any future plans to covnert the auditorium for non-cinema use.