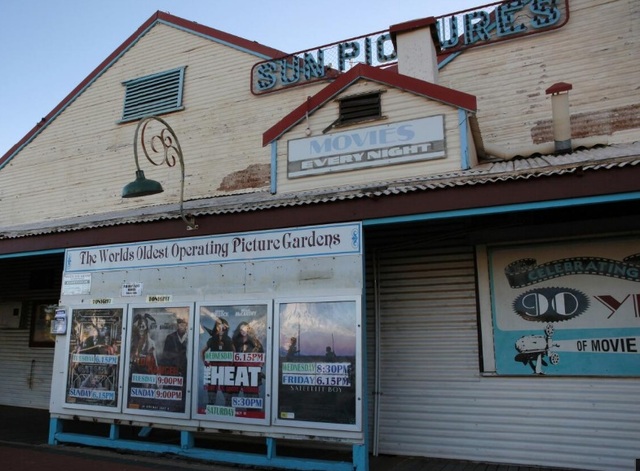 The Sun Pictures opened on 9th December 1916. It is an open air cinema, with a garden setting, and was designated ‘the worlds oldest operating open air cinema’ by the Guinness Book of Records in 2004.

There is an under-cover foyer at the entrance and some seating at the rear of the cinema are also under cover. The remainder of the seating is open to the sky, as is the screen.

The cinema is located directly under the flight path of nearby Broome Airport, and this has become a unique feature of the cinema, as for many years, it has brought applause from audiences as planes fly overhead.

The Sun Pictures was Listed on the National Register in 1989. It underwent restoration in 1999/2000. The Sun Pictures operates October to April. The twin screen Sun Cinema, just a short 10 minutes walk away, and operated by the same operator, is open all year round.

There will be 100th birthday celebrations sometime in July this year(exact date unknown as let?)!!

The 100th birthday celebrations will on 26/8/2017, details on the Sun Pictures website.

There will be some Walk of fame plaques unvaled in front of the Sun Pictures building on 26/8/2017 at 4.00pm before the main celebrations from 7.30pm to midnight.

Sun Pictures appears in the last 4 pages of the childrens book “Looking for Bobby”(Kerry Anne Jordinson).

The first sound movie shown here was “Monte Carlo”(made in 1930) in 1933. Sun Pictures may be the only picture theatre in tne World to get(tidal?) flooding outside the theatre building?

No flooding anymore, since the levees were built in Broome(1980’s?).

Actor Kirk Douglas was born on the same day this picture gardens opened(9/12/1916).