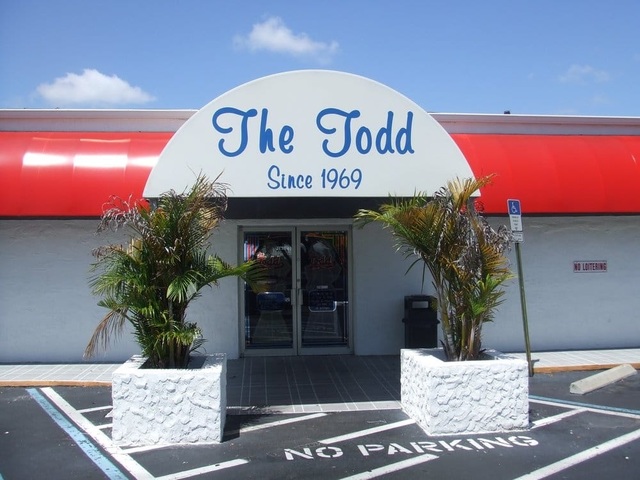 The Todd Theatre opened in 1967 and showed adult films until at least the early-1980’s. The business is now an adult video store.

One of two things has happened, based on comparison of the pictures:

(1) This is the same building, but the auditorium was razed and parking was put in it’s place. The entrance is also now a few doors down, as they apparently have taken over the two storefronts that were there. I think this is what happened.

(2) This is an entirely new building. That seems unlikely.

Last time I went there about 5 years ago, they had the quarter arcades but no semblance of a theater.

Here’s some information which will clear up the confusion on the theatre building. The link above of the 1981 photo is the original Todd Theatre building. It was located near the southwest corner of Nebraska and Fowler. This building and the attached strip stores were completely demolished years ago with the exception of the Todd Theatre sign.

The sign was moved a few blocks north to a new location at the corner of Nebraska and Fletcher where the Todd Theatre had relocated to. It was installed on the roof and remained for several years before being taken down. The building is still open today as an adult business but not sure whether it’s still called the Todd. I went once but only to browse through the videos in the lobby.
I never did go inside the theater.

The original Todd Theatre at Nebraska & Fowler opened on 12/26/69 but not as an adult theatre. It opened with the award-winning film “The Fixer” starring Alan Bates. The Todd’s owner was inter-viewed on opening day and stated that the Todd will not be showing skin flicks. And exactly one week later it went adult!

From time to time the theatre ran general films as well. I remember seeing “MASH” and “Don’t Look Now” as well as a James Bond film in the mid 1970s.

The land where the theatre stood is now part of the parking lot for Family Dollar Stores which was the former Luby’s Cafeteria.

It is hard to believe and Adult theatre would switch product from X to PG,but in noticed the MODJESKA played FIVE ON THE BACKSIDE a PG movie,very rare once they went R ratings only.

I’ve updated the street view for the original Todd Theatre which was demolished years ago. The land is currently a parking lot for Family Dollar Stores (formerly Luby’s Cafeteria.)

The current google address for the Todd is incorrect as it maps to the building known as the Todd Adult Video located about a mile north of the original Todd Theatre. The header should be changed to 11660 North Florida Avenue.

The current building utilizes the “Todd” name but was never a true movie theatre. It was originally an adult bookstore with a video projection room added when the Todd’s owners moved here after the original Todd was demolished.

To see a very nice photo of the original Todd from American Classic Photos, check out the link provided by kencmcintyre.

High Nick i see you got to change you name back,but when you click on your name it only shows 7 comments,you must have 2 home pages.Welcome back also.

Thanks Tlsloews, Nunzienick was one of my many nicknames of years ago that I selected as my username on the old CT site but I’m glad it was changed back.

The Todd Theater was named for one of the sons of owner / builder Eli Jackson. In 1972 I automated the cinema with Tampa’s first film platter system hand delivered by van by Robert Potts. Approximately a mile north was Mr. Jackson’s office which was located in a mobile home park that he owned. He was involved in film distribution and nightclubs.