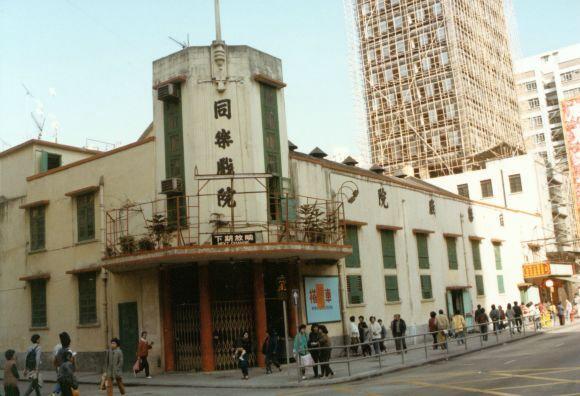 The Tung Lok Theatre was a neighbourhood cinema in Yuen Long in the New Territories.

Tung Lok is the Cantonese pronunciation of its Chinese name, literally meaning "happy or enjoy together."
The theatre building was long and narrow and running parallel to the thoroughfare, with its 642-seat stalls only auditorium on the ground floor. Its entrance was at a corner of the building, with another for the front stalls at the front.
It had two sets of its Chinese name in four Chinese characters on the wall of the building, with one set horizontally from right to left on the facade of the wall facing the thoroughfare, while the other vertically above the entrance at the corner. A flag post was on top of the building above the entrance.

As the theatre posted no advertisements in the Chinese language newspapers, nor had its name listed in the film guide, its programme before the WWII is unknown. During the war years, only films censored by the Japanese Armies could be shown. The theatre was in business as of 17th October, 1943.

It re-opened at an unknown date after the war. According to a source, the theatre showed mainly English language films in the 1950’s.

The theatre closed in the second half of the 1980’s. After its closure, the auditorium was converted into a market selling inexpensive goods.

The theatre was rebuilt as a high rise commercial building with shopping arcade and two mini cinemas in the 1990s.