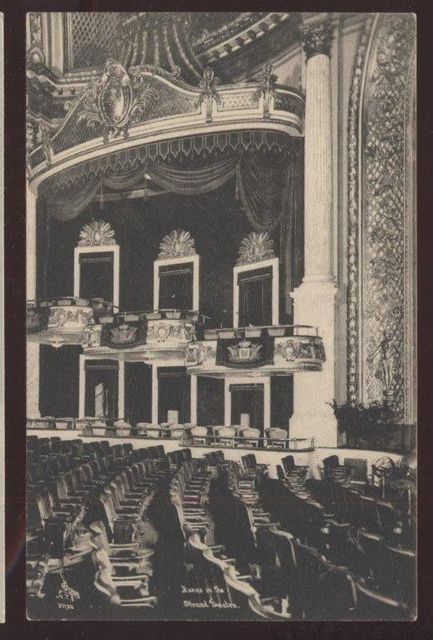 Located on Broadway at W. 47th Street, the Mark Strand Theatre was opened on April 11, 1914 with the photoplay “The Spoilers” starring William Farnum. It was built for the Mitchel Mark Realty Company and was under the early direction of Samuel L. “Roxy” Rothapfel. It originally had a seating capacity of 2,989 located in orchestra and a single balcony. It was equipped with an Austin 3 manual organ with 49 registers.

The Mark Strand Theatre began its life with stage shows in addition to movies and also had one of the largest stages in the city in 1914. After stage shows were dropped in 1929, seating was reduced to 2,750. In the late-1930’s stage shows (and vaudeville) were brought back.

After dropping stage shows on July 3, 1951, the Strand Theatre was renamed Warner Theatre, and opened with “Strangers on a Train”. During 1952 to 1953, the theatre closed, was renovated and renamed Warner Cinerama Theatre. Cinerama films moved here from the Broadway Theatre, starting with “This Is Cinerama” in 1953.

On June 30, 1968, the theatre was twinned becoming the Warner Strand Theatre. A third 450-seat theatre was built on the old Strand Theatre’s stage-house, named Cine Orleans (Off Broadway), which had its own entrance on W. 47th Street. On June 3, 1971 following an over $5000,000. refurbishment it reopened as the RKO Warner Twin Theatre. With 1,100 seats occupied the main floor. The former balcony became the 1,200 seat Penthouse Theatre.

Unfortunately, on February 8th 1987, after a long and eventful life, one of the greatest movie palaces of New York City closed and was demolished.

to Al A.- your replies are lways welcome. a question- you don’t think Porgy and Bess never having been released on home video has anything to do with being to use a current term “a problematic film”?

Could be. Or could be the original elements aren’t in good shape. Or a combination of the two. Porgy and Bess was revived on Broadway as recently as 2012.

Although there are some ‘race’ issues in “PORGY”, they are no worse than many other older films such as “SOUTH PACIFIC”, “GONE WITH THE WIND” and “BREAKFAST AT TIFFANY’S”.

Agreed, Al. How about Birth of a Nation? And there’s scads of dialogue in so many classic films that would make folks wince today (referring to Sam as a “boy” in Casablanca, Groucho referencing the song “That’s Why Darkies Were Born” in Duck Soup). I think we need to view these movies in the context of their times. But I also say it could be a factor in why the film has not received a restoration, and why you don’t see it on TV all that often anymore.

These random conversations are always a good opportunity to check out the recent photo additions.

On a question often asked on this site by bigjoe, a November 3, 1932, NYT obituary article on Moe Mark credits this location as the first purpose built non-nickelodeon motion picture theatre.

you are correct about me trying to find the 1st purpose built movie theater in Manhattan. the Regent on 135 St. predates this the Strand by a year.

I think they give the Strand credit instead of the Regent because unlike the Regent, it was an immediate success. Anyway, I think the brothers Moe and Mitchel Mark deserve a mention in the intro.

The film of Porgy and Bess was not shown for years because the Gershwin estate suppressed it. I guess they hated it. It was shown at the Ziegfeld for a one time showing. The musical/opera is done regularly and was done at the Met last year.

The Houston Grand Opera production done on Broadway many years ago(done first at the Uris and then at the Mark Hellinger) was one of the greatest things I’ve seen in my life. There is a recording of it on RCA but it was better than what is captured on the recording. Still it’s worth having to hear Clamma Dale and Donnie Ray Albert.