Previously home to a card and gift shop at the Northridge Shopping Center, the tiny Old Tyme Movie House brought classic Hollywood movie revivals to Broward County from February 6, 1976. For many patrons, this was the first chance to see vintage films uncut and uninterrupted, from "Citizen Kane" to "The Creature from the Black Lagoon." After one last engagement of "Duck Soup" in spring 1978, Old Tyme Movie became Northridge Cinema from July 7, 1978, adopting a second-run discount-admission policy (with occasional special engagements such as "The Man Who Fell to Earth" and "The Decline and Fall of Western Civilization"). Closed by the late-1980’s, a pizzeria took over the space, later demolished in a makeover of the surrounding shopping center.

Old Tyme Movie has my enduring thanks for making quite a few classics available that had eluded South Florida TV at the time, particularly the MGM Marx Bros. features, Fred Astaire’s non-Ginger Rogers musicals, and what remains the strangest double bill ever: “Easter Parade” and “Freaks.” TV ultimately had the upper hand, but Old Tyme’s effort is fondly remembered here.

Harvey, thanks for that discovery! I remember many a time when every seat was filled in that tiny space. Shame that Old Tyme’s popularity didn’t last beyond two years, but it held on for most of a decade as the Northridge.

If anyone from CT sees this: the seat count was 189. Thanks.

I lived in the area during the 80s, and I don’t remember this theater. When you say tiny, how tiny is tiny? I used to frequent the Northridge Raw Bar nightly, and I never saw this theater, maybe it was the beer and I missed it! 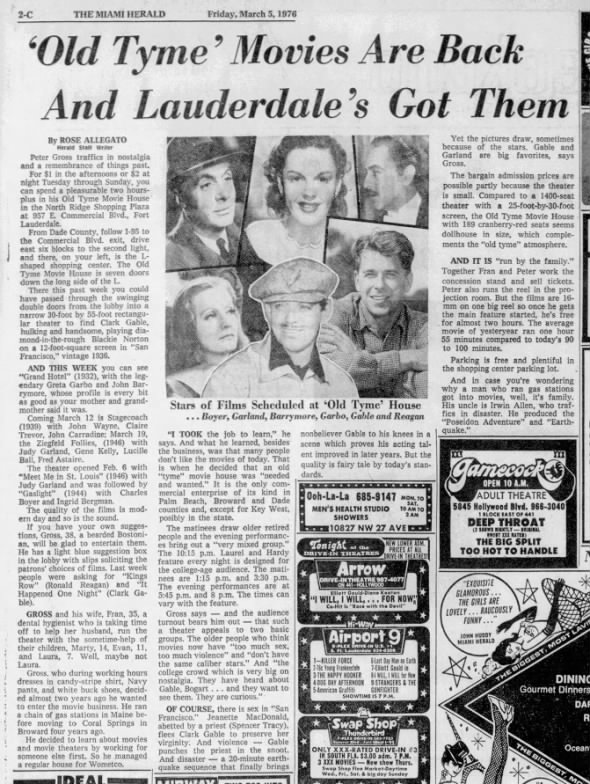