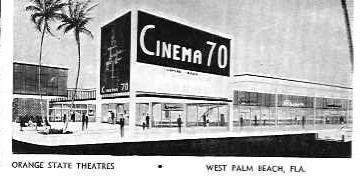 Orange State Theatres opened the Cinema 70 among the anchors at the Palm Coast Plaza on June 27, 1966 with Paul Newman in “Torn Curtain”. It was taken over by Loews on December 16, 1967 and was renamed Loews Cinema 70. On June 30, 1972 it was taken over by Ceneral Cinema Corp. It remained a single widescreen auditorium well until it was tripled on October 13, 1977. General Cinema assumed ownership when Loew’s made a preliminary pullout from the South Florida market. The Cinema 70 remained a first-run venue until closing on April 30, 1989. Demolition came in the early-1990’s.

Correction: Loew’s took over the Cinema 70 in 1967, as they began an expansion into South Florida. They also briefly had the old Boynton Cinema (Sunshine Square, U.S. 1 at Woolbright) in their circuit.

What happened when “The Godfather” came to town:

Based on the article above: seated 999.

The Winston-Muss Palm Coast Shopping Center Plaza was the largest project ever in West Palm Beach at $2 million when it was announced in 1959. During an expansion, Orange State Theatres, Inc. built and opened the Cinema 70 to the plans of architects Ernest Schroeder and Jack Willson. It was located at 7923 South Dixie HighwayThe venue opened June 27, 1966 with Alfred Hitchcock’s “Torn Curtain.” S&S Cafeteria was another added business and was the Cinema’s neighbor.

On December 16, 1967, Loews Theatres acquired both the Cinema 70 and the Boynton Beach Cinema owned by Florida State. The venue’s name changed to the slightly redundant Loews Cinema 70 Theatre. In 1971, the shopping plaza added an indoor mall connector in yet another expansion doubling the number of stores since its original opening.

In a major business development announced on May 30, 1972, Loews sold all of its theatres in Florida to its rival, General Cinema Corp. (GCC), effective June 14, 1972. The Loews Cinema 70 Theatre became the GCC Cinema 70. Michael E. Stinson would be the venue’s manager for some 17 years.

On October 13th, 1977, the Venue became the General Cinema 70 I, II, III as it was triplexed. The theatre closed at the end of a leasing period on April 30, 1989 with “Fletch Lives,” “Tropical Snow” and “Dangerous Liaisons.” The venue was razed but the Palm Coast Plaza was still vibrant after more than 60 years in the 2020s.