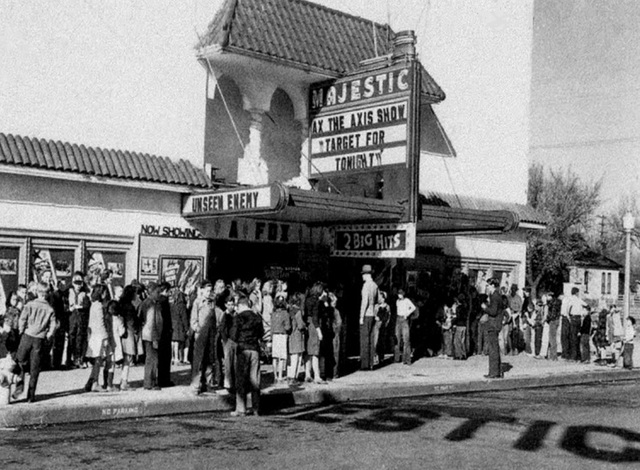 The Canyon County Historical Society says that the Majestic Theatre was called the Nampa Opera House when E.L. Elvers built it for $20,000 in 1910. In newspaper reports from 1912 it is referred to as the Nampa Theatre.

In 1917 it was renovated and renamed the Majestic Theatre. From the Idaho Free Press in 1926: ‘Stuffy, hot, impure air will be eliminated in the Majestic Theatre in Nampa. Artie Nu-Air will be installed and ready for use. It is operated by a five horsepower motor, which delivers 35,000 cubic feet of fresh air per minute. The theatre will be furnished with an entirely new supply of cool, fresh, sweet, invigorating ozone every 2½ minutes.’

In a 1967 Diamond Jubilee edition the Nampa Free Press carried a story of the October 1918 flu epidemic where indoor public gatherings were banned. The Majestic Theatre circumvented the ban by holding showings outdoors. It was the fall season but the weather was mild and there wasn’t too much patron discomfort.

Before and after photos on display at the historical society museum show that the remodeling in the 1930’s gave the exterior its distinct look and the interior an Atmospheric character. Photos show the theater had a balcony and the museum’s display describe the interior as resembling a ‘Mediterranean villa with waterway’. In July of 1946 the Majestic Theatre and the local Adelaide Theatre were listed under the Fox Intermountain Theatres banner in the Idaho Daily Statesman.

In the early morning hours of August 26, 1958, the Majestic Theatre burned to the ground only a few hours after the evening crowd left the theater and there was nothing left to rebuild. The location was next to old the fire station, where a new fire station stands today. The Canyon County Historical Society, which is located in the old train depot, has publications and photos of the old Nampa theaters.