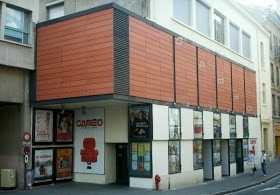 Located in the town center of Nancy, the Cameo St. Sebastien has two auditoriums and shows first run movies. Previously operated by UGC, it is now Cameo’s second local movie theater, the Cameo Commanderie being the other one.