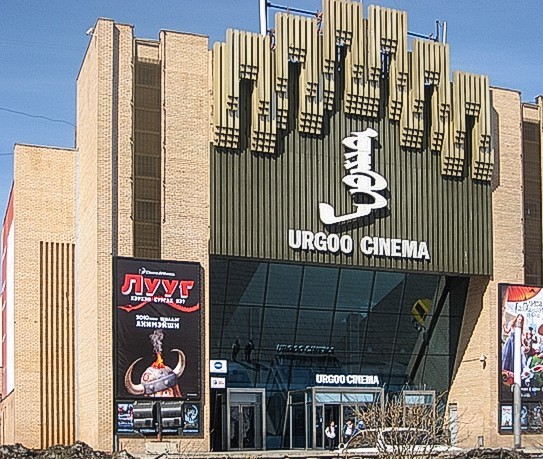 Welcome to the new and improved Urgoo Cinema, Ulan Bator. It opened in 1989 and was renovated in 2009.

The only cinema in the city with its exclusive VIP section. It is now home to luxurious spacious seating, waiter service and a full bar. It is operated by Warner Brothers International.

I wonder what “Urgoo” might translate to in English. Is it a typical theater name such as “Palace” or “Strand” or a street name or the name of a theater chain?

Urgoo means palace, according to this site:

Formation of the Mongolian Capital has a trace from XVii century. in the year Yellow Rabbit by lunar calendar, exorbitant and influential noblemen proclaimed Zanabazar, son of the Tusheet Khan Gombodorj who was one of the 4 lofty noblemen as the MonÂ­golian Buddhism and built a special monastery complex for him. it was more palatial-like than monastery. Later, Urgoo (means palace) had been develÂ­oping as Zanabazar’s reputation and influence grew in the Mongolian social life.

Thanks. I thought some CT contributor would probably know or be able to find out.

Always good to brush up on my Mongolian every once in a while. I get rusty.

Warner once had an major theatre chain in the United States.