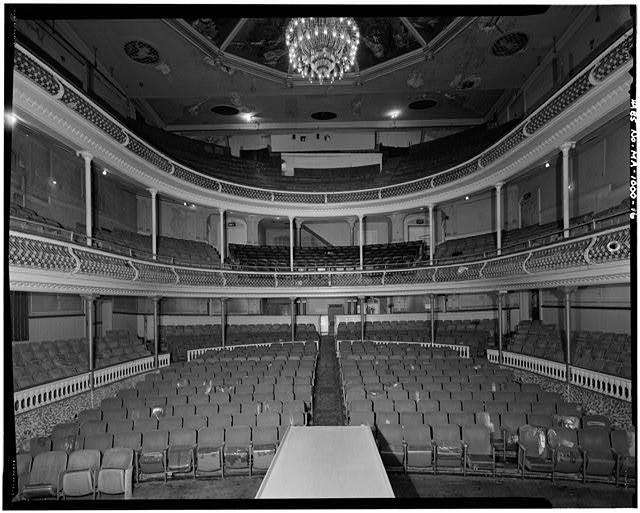 The Academy of Music was opened January 6, 1876. with 2,050 seats. Later known as the Academy Theatre, it was a movie house for decades and finally ended its film run as an adult theatre.

The Academy Theatre was added to the National Register of Historic Places in 1980 and was restored to its original appearance in the 1990’s.

The building now houses shops on the first floor and senior housing on the upper floors. The auditorium of the Academy Theatre has been razed, replaced by modern senior housing and a garden area.

The new book “Theaters” by Craig Morrison has 6 photos and one floor plan of the Academy, all made in 1979. The adddress is 68 – 114 South Main St. Opened January 6, 1876, Hartwell & Swasey, architects. 2050 seats, which were located on the main floor and adjoining parquet circle; plus two balconies. The 2nd balcony still had its antique wood benches in 1979. The LHAT Directory also has the Academy, with a long list of stars who appeared there during its long stage career. The MGM Theatre Photograph and Report form for the Academy has a photo taken in May 1941. The Report states that the theatre was not a MGM customer, that it was in Poor condition, that it had 900 seats on the main floor, and 500 in the balcony, and that it was, at the time, Closed. Other theatres in Fall River in 1941 were: The Empire on S. Main; the Durfee on N. Main; the Royal on Brightman; the Strand on Pleasant St; the Embassy on Franklin St.; and the Capitol and the Center, both on S. Main. There is a note that the Center Th. was originally the Olympia.

An impressive collection of rare photos of the Academy and other Fall River theatres can be seen by clicking here.

A November 15, 1946 Fall River Herald article reported that the “former Academy of Music” was to re-open in a few days as a movie house after being closed for ten weeks for substantial redecoration and refurbishing. The theatre had been fitted with a new projection booth, and new sound equipment. The theatre at the time was incorporated as part of the Zeitz Theaters of Fall River, Inc. That was a chain of theatres run by Carl Zeitz in New Bedford (Zeiterion), Portland, and Newport (Paramount). The initial program was Canyon Passage and Cuban Pete. Without use of the upper balcony, which would remain closed, the seating capacity was noted as 1,300. Carl Zeitz himself, former Army captain, would manage the spiffed-up theatre.

Here is an old postcard booklet image from the 1930s or 1940s showing the relationship of the Academy (marquee on the right) to Fall River City Hall.

As a young teen in the early 70’s I spent every Sunday at the Academy during the winter. My parents would drop off my then soulmate Fernando and I here for the day. They would know where we were and it would keep us out of the cold. We seen vintage horror films and every Bruce Lee film made in that building. Seeing this picture brings back great memories for me. After seven years of going steady Fernando and I married and this year celebrated 26 years of marriage. We still love to go to the movies.

The Academy of Music is listed under Fall River in the 1897-98 edition of the Julius Cahn Official Theatrical Guide. W.J. Wiley was the Mgr. Seating capacity was 2,000; the proscenium opening was 36 feet wide X 35 feet high and the stage was 45 feet deep. It says that the theatre was on the second floor – was that true ?? There were 4 daily newspapers in Fall River, plus a French-language Sunday paper. Hotels for show folk were Mellen, Wilbur, Narragansett and St. James. Railroad was the New Haven RR. The 1897 population of Fall River was 93,000.

I’m not sure why it was, but my family almost never took me to the academy. We visited the Durfee and the Center, we went to other movie houses but very rarely the Academy.

Still, I recall the seventies with it’s horror/kung fu weekend features. I thrilled with the re running of old chapter plays with those types of films.

…and I recall the wonder of it, and it’s block’s architecture. Gargoyles and flourishes, wood and brick. Even in the seventies, when the joke was that if you dropped any popcorn…rats would run out and eat what you dropped…there was enough to tell you that this theater still had grace.

An item in the December 14, 1946 issue of Boxoffice Magazine noted that the Academy had elevator service from the boxoffice area to the second floor auditorium of the theatre. The elevator was operated by John Sheehan, and was available until 8:30 each evening.