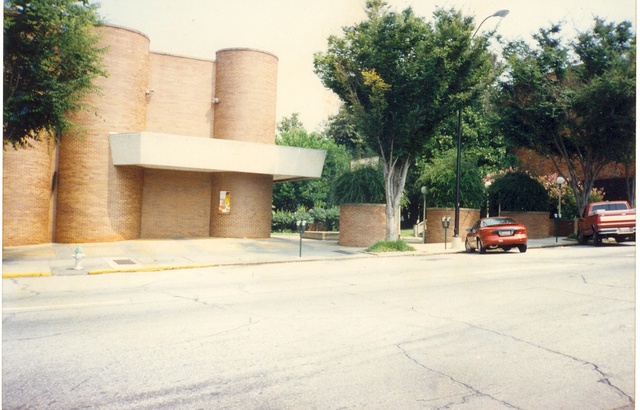 The Classic Theatre was described at its opening in 1969 as ‘an ultra-modern 1,200 seat rocking chair theatre with a 70mm screen’. In 1974 it was split into three screens. It closed November 6, 1994, and was torn down for parking. Its sign still is on the side of the Georgia Theatre. Architect was Robert W. Kahn, who designed a number of theaters for the Georgia Theatre Company.

Couldn’t see CLOCKWORK ORANGE In Augusta,CHIEF OF Police Jim Beck said he would raid the IMPERIAL if it was shown.So a friend and myself drove to the CLASSIC which was still a beautiful single screen and watched the movie twice.
In them days one could buy a ticket and watch until closing. I don’t think the screen was as large as NATIONAL HILLS which also showed 70mm.

Georgia Theatres had a habit of ruining great theatres,Did the same thing to National Hills in Augusta.GOTTA HAVE MORE SCREENS ! Sorry all this multiplexing ever happened.

I worked at the Classic Triple from 1987 to 1992. I would have loved to see it in its original state as a single-screen theater. By the time I worked there, it had been turned into a triple & the concession stand was turned 90 degrees from its original location and was moved across the lobby, probably for more storage space.

The circular offices were impossible to keep organized. Every try and stuff a rectangular desk into a round room? File cabinets? Framed pictures? Forget it.

Still, the Classic had tons of charm. There was a fountain in the courtyard that was illuminated at night. But it was the lack of parking that doomed it. Especially when all the parking meters had a 2-hour maximum. The mall had acres of free parking and better sound systems.

I worked at The Classic Triple from December 1992 to August 1993. I was the next to last manager. This theater had 3 screens. Two screens with around 100 seats, and one with around 500. The location of this theater was about 2 blocks from UGA, and eight bars within screaming distance! I remember coming in every Sunday morning draining the fountain after being used the previous night as a public urinal by every drunk in town.

The Classic Theatre is reborn being used for Broadway plays.Any info Athens Folks.They are FACEBOOK.

Among the last films shown at the Classic Triple were “Speed,” and “I Love Trouble.” The latter film was the last film I saw here.

I loved the Classic Triple. My first movie there was The Jungle Book back in mid 80’s, and Ghostbusters. I also saw Mississippi Burning there. I was always intrigued by the empty fountain for some reason. I do remember seeing a movie poster for Fletch.

I was a student at UGA in the late 80s and early 90s. If I recall correctly, The Classic Triple was a first run theatre until the early 90s. I loved this theatre. The lobby was decorated with pictures of former UGA football players.

The first movie I saw here was Wes Craven’s “Shocker,” opening night. I walked through the lobby, intent on finding a picture of the then-current head coach, Ray Goff. I remember noticing a lot — A LOT of really big dudes in the theatre lobby. When I finally found Goff’s picture, I pointed it out to a friend. He walked away quickly, and that’s when I noticed that the large dudes were the current players, and that Goff himself was sitting below his picture talking to an assistant coach.

Other movies I saw here, mostly when it became a dollar theatre: The Age of Innocence, My Cousin Vinny, The Distinguished Gentlemen, Night and the City…several more.

The most memorable was Menace II Society. It was pretty crowded and a fight broke out. Good times.

What chain operated this during its final years?