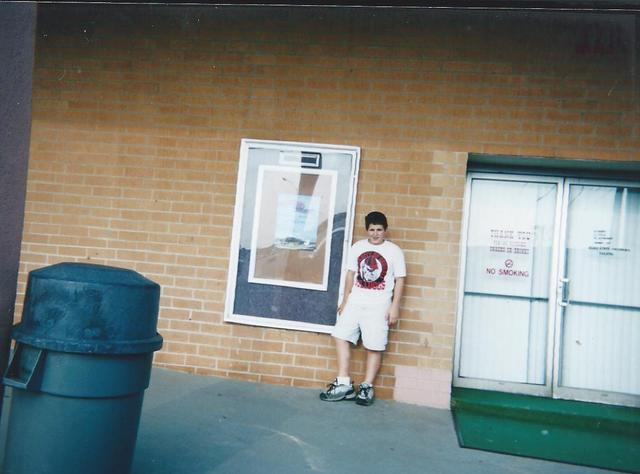 The Alps Minicinema was a very small theatre opened in 1968. In 1974 Weis Theatres took over operation. In 1984 Litchfield took over extremely briefly, then turned over to Georgia Theatre Company. United Artists took over GTC operations in 1988 and quickly divested the cinema. It then became Abrams Alps Cinema. A longtime adult or dollar house, it flirted with independent film briefly before closing in 2000. A victim of expanding multiples and a redeveloping shopping center, no trace of the Alps Cinema remains visible.

Doonyman,I came across a picture of the ALPS the other day. A local theatre group was using it for a play i guess back in the middle 90’s.

Wait a second, wasn’t the Alps Theater at the very end of the shopping center, closest to Baxter? Isn’t the Kroger at the other end?

yes, Joshmassey it was at the very end of the shopping center. I have pictures,but not the equipment to get them on.

This theater had a policy trailer that announced the theater’s staff. Among the staff was Al Johnson, the custodian. Al always got a thunderous applause, as the theater was the cleanest in town.

I managed Alps in the mid-late nineties and was projectionist as well. It was a quirky theatre, but fiercely proud of maintaining a traditional theatre experience. As Matt said, we started every production with the policy trailer (with Al and the management staff listed, and yes, everyone clapped for only Al). Sol Abrams (hence the name Abrams Alps Cinema) owned the theatre and insisted on a “production” every time we screened a print. So, we picked the music we played as patrons entered to match the feature as much as possible and kept the floor-to-ceiling curtains closed until the policy trailer started, then I flipped the switch to open the curtains and lowered the lights. Everyone loved the theatrical nature of it all. Its not something you found in “Mall” theatres. (That’s another thing. Sol insisted in the theatre spelling instead of theater) Patrons lined up outside to wait for the doors to open, which we only did about 30 minutes before the feature began. They filed in, paid $1 for an old school, roll ticket, handed it to me, I tore it in half and let them in to the lobby. When it was time to start the feature, I would hand over “ticket-tearing” to someone from concessions and head to the projection booth. We didn’t have a modern platter system. Instead, we had two 1936 Century projectors that had come from the old Strand Theatre on Main Street, with carbon arc lamp housings converted to use 3000w xenon bulbs. They worked on an automatic changeover system that, on occasion, failed and I had to manually start projector 2 and shut down projector 1 halfway through the print. The theatre had an 80ft throw from lens to screen. The sound system was 85db Dolby with all speakers in the ceiling and behind the screen. The storage room (“Candy room”) was house-right, just behind the screen. We served classic concessions. Popcorn was popped with coconut oil and Flavacol salt. Candies were Dots, Goobers, Raisinets, Haribo Gummibears, Junior Mints, Lemonheads, Milk Duds, Sno Caps, Sugar Babies, Sweet Tarts, Whoppers and Twizzlers. My favorite quote from Sol Abrams concerning the theatre is “You pay your buck, you take your chances.” Essentially reinforcing his policy of no refunds. My predecessor as manager was Mike Landers and my successor was Jim Bergen. I apologize for the stream-of-consciousness post, but I wanted to get as many facts in about alps during my time in as possible. There are many more, but putting them into a post is the wrong format. I wish there was a way to edit the cinema description.

One other thing, Sol Abrams owned Alps after he retired. In his earlier career, he founded Beechwood Theatre across the street, one of the earliest integrated theatres in the south. The manager of Beechwood while I was at Alps in the nineties was Sol Abrams' nephew David.

I can confirm that from 1984-1986, this was a second run house. It was on the end of the Baxter side of the shopping center, next to Gibson’s Dept. Store. I went to Clarke Middle school across the street at that time, and my mother was the manager of “PartyTime!” a store just a few doors down in Alps shopping center from this very theater. I’d frequently catch a movie after school, while waiting on my mom to get off work. Back then, before 5pm a ticket was only $0.35, and popcorn and a coke was $1. And for my mom, $1.35 was a bargain to keep me out of trouble for 2hrs. I remember seeing: Running Scared King Solomon’s Mines Remo Williams Spies Like Us More I’m forgetting… I can’t remember who owned it at that time, but I always liked that little place. And they treated me like a regular, even as a 13yr old kid.