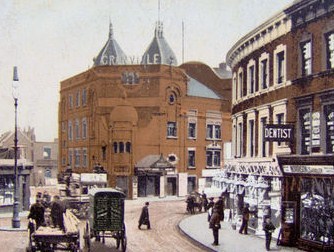 Located in the Walham Green area of the west London district of Fulham. The Granville Theatre of Varieties opened on 19th September 1898. It was built for comedian Herbert Campbell, and his two co-directors who were fellow music hall & pantomime comedians; Dan Leno & Harry Randall. It was perhaps the smallest theatre that noted theatre architect Frank Matcham had designed. With seating provided for 289 in the orchestra stalls, 210 in the balcony and 280 in the gallery, there was no room to have seating in boxes, but there was standing room for a further 343 persons.

The Granville Theatre of Varieties took an entire small block of land, surrounded on all four sides by streets, with the entrance at the corner of Fulham Broadway and Jerdan Place and the dressing room block on Vanston Place. There were two extraordinary minarets along the top of the facade, and another minaret dome above the corner entrance.

The most unusual feature of the theatre was that the entire auditorium was covered in highly decorative glazed Doulton faiance tiles. This is possibly the only known theatre to have such a decorative treatment, rather than the normal decorative plasterwork found in theatres. The proscenium, balcony fronts, walls and even the ceiling were covered with boldly modelled cherubs, grotesque masks, manufactured in the richly coloured earthernware tiles.

There was a small 12 feet deep stage (later extended back to 24 feet), the proscenium was 25 feet wide, and there were ten dressing rooms.

From 1910 until at least 1915, the Granville Theatre of Varieties was in use as a cinema and for that use the seating capacity was reduced to 850. It was still listed in the Kinematograph Yearbook 1937 edition, possibly screening films on Sundays only, a day when live performances were not allowed. It went back to variety productions on its stage, and from 1942 it was re-named Granville Theatre, when it was in use as a playhouse theatre, staging small scale plays.

The Granville Theatre was closed in 1950. In 1952 it was used extensively as a location for the film “Tread Softly” starring, Francis Day, Patricia Dainton & John Bentley. Following this it was converted into a film studio. The building itself remained unaltered, apart from a leveling of the main orchestra stalls floor. The film studio used closed in 1956 and the building lay empty and unused.

In September 1971, planning permission was granted to demolish the Granville Theatre, for it to be replaced by an office block. Despite protests from the Fulham History Society and letters to the local Hammersmith Borough Council and the Greater London Council Historic Buildings Division, the demolition plans went ahead in October 1971.

The rather bland office block built on the site contains retail units at street level, which in 2008 are occupied by Barnard Marcus, estate agents and a branch of Barclay’s Bank.