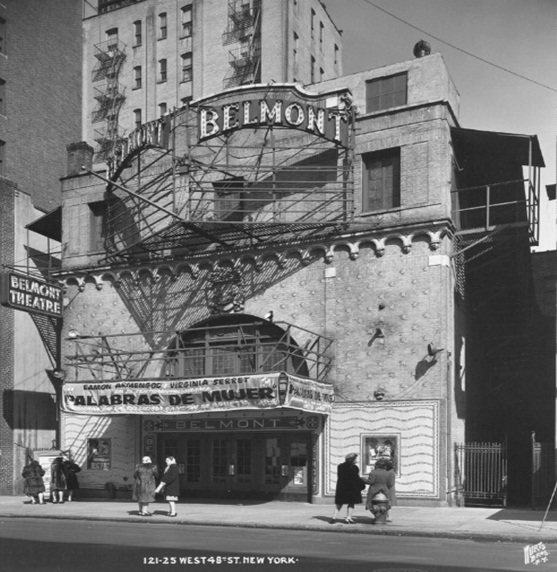 Opened by producer/actor/director Jack Norworth on January 28, 1918, this relatively small playhouse seated just over 500, and featured a Venetian Renaissance façade, complete with a pair of large bronze lanterns on each side of the arch window over the marquee. Its understated interior featured a single balcony and just a set of boxes on each side of the proscenium arch.

Norworth opened his theatre with a comedy called “Odds and Ends” which was moved from the Bijou Theatre, where he was starring in it. After the failure of this show (it ran for eight weeks), Norworth lost the theatre just four months after opening it. New owners took over continuing legitimate theatre and it was renamed the Belmont Theatre.

In 1919, the theatre was briefly renamed the Theatre Parisien when French dramas played there until 1920, when its next owners renamed it the Belmont Theatre, and straightforward legitimate theatre returned.

It was closed by 1951, and was demolished that year.

I just watched the 1945 movie Doll Face with Viviane Blaine and Perry Como. Blaine’s character is in a stage show she is to perform in at the Belmont Theatre in New York. In the last half hour of the movie we see the theatre exterior at night with lights and the theatre name “Belmont” as well as interior shots of stage and audience. I have no way of knowing whether the actual Belmont was used for exterior and interior shooting or whether other locations were employed for either or both. Perhaps it was all done in Hollywood, but it’s supposed to be the Belmont in New York. Perhaps someone can look at the DVD and come to a conclusion.

Still listed in the 1953 Film Daily Yearbook as CINEMA 48, an Ansell theatre, a chain that runs Spanish language theatres.

Jack Norworth is in the Songwriters' Hall of Fame, on the strength of “Take Me Out to the Ball Game” and “Shine On Harvest Moon.”

According to “The Encyclopedia of the American Theatre Organ” by David L. Junchen, pg. 630, the Belmont Theatre in New York City, New York, had a 2-manual Seeburg-Smith organ installed in 1921. This organ had a 2 horsepower Kinetic blower, serial #I453, and was installed in 1921.

Does anybody know what happened to this organ, and where it (or its parts) is/are today?

There seems to be some confusion between the Belmont and the West Forty-Eighth Street theatre, which apparently was across the street at 124 West 48th Street. It had previously been Uncle Sam’s Music Hall, which Robert Benchley reviewed in the January 27, 1940 New Yorker. He found their show offensive, “not one a father could take his children to”. He did admit his protest was somewhat “vitiated by the fact that the child in question was at the moment towering over me from a height of six foot two and was accompanied by his wife”. Apparently undaunted, Uncle Sam’s continued on, and in the March 16th, 1940 Cue Magazine, advertised “She Gave Him All She Had”, and suggested audiences “hiss the villain”. Nevertheless, on May 12,1940 Uncle Sam’s became the 48th Street Music Hall, and initiated a run of silent movies. Many stars attended the festivities on the opening night, Walter Huston, Madge Evans, Gertrude Lawrence, etc. The silents continued until May 26, 1941. At times the theatre had free admission, the bucks apparently being brought in by beer, liquor and food. Richard O'Brien

Steven, that photo is from a theatre across the street (124 west 48th street) that showed movies in 1940. I don’t think it is listed here. Yet.

According to J. Hoberman’s book - Bridge of Light - the Belmont was a showcase for Yiddish language films in the 1930s.