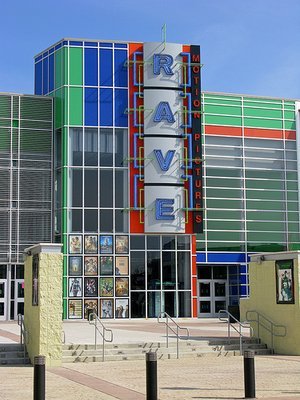 Opened December 15, 2006. This theatre features 100% Digital projection, and is 3-D equipped as well. Stadium seating as well as all the other amenities you would expect of a modern multiplex are here. As of 2012, Carmike took-over as movie operator from Rave Motion Pictures. It is now operated by AMC.

Dolby Cinema opened the last week of November with AMCs Signature Recliners only in that theater.

Currently, the theater is cleaned hard and comfortable. The DOD Matrix is off and Dobey Cinema has white carpet, recliners, neon blue lighting all around, big screen and speakers all around. Nothing much has changed since closure except Dolby Cinema opening.

The Rave Motion Picture’s Promenade 16 opened on December 15th, 2006. This theater was a huge success as an upper class movie experience. On April 29th, 2011, one of it’s auditoriums have been converted into an IMAX Theater. Sometime in 2012/2013, the theater was purchased by Carmike Cinemas, which operated the Carmike Allentown 16, The Theater was renamed to Carmike Promenade 16. In 2016, the theater was bought by AMC Theaters. In 2017 the theater was renamed to the AMC Center Valley 16. In November of 2020, Theater 2 was closed and converted into Dolby Cinema at AMC which brought the premium of Dolby with recliners.

Auditorium 2 due to it getting gutted fully for it’s Dolby conversion is also the only Auditorium to no longer have the wall sconces that were installed by Rave with there R logo on them. The interior was redone to the Dolby Cinema spec and has all Black versions of the AMC wall sconces and recliners with touchscreen style controls instead of the pull handle used by the Red model.

In 2019, some employees were saying about the Dolby Cinema coming which it did, also adding a MacGuffins bar but not yet happened. I assume it was a rumor something I have no idea.

As of today, the arcade is reopened

Which theatres are on the left side of Center Valley 16, and which are on the right side?

Michael R. Rambo Jr. from the Lobby Auditoriums 1-4 are on the Left 2 is the Dolby Cinema and 4 is the IMAX Auditorium. Except for 1 2-4 are 2 floor Auditoriums and the elevator in the Hallway acts as the ADA path to the top level wheelchair spots and the 2nd level of seats. 5-16 are on the right. the Fathom Events equipped auditoriums are on that side.

As of July 13th, 2022. amctheatres and fandango websites has shown that this theatre is temporarily closed.

Update: Theatre reopened at a later time today, currently showing tonight’s shows according to the AMC and Fandango website