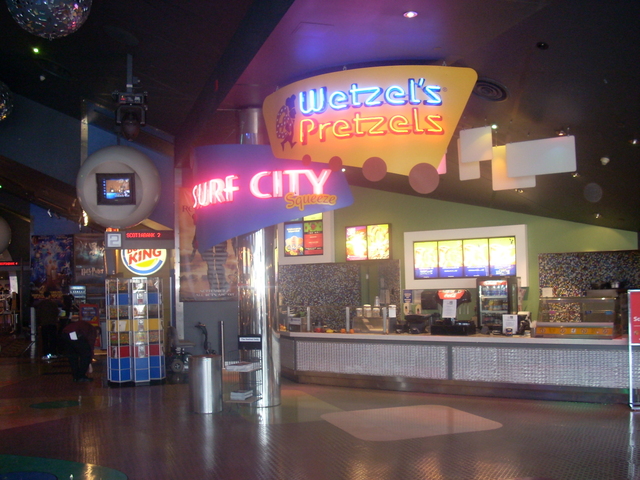 The Paramount Toronto is the first movie theatre to be built in downtown Toronto, south of Bloor Street, in 14 years.

Located in the midst of the Queen Street West shopping, fashion, nightclub, and entertainment district, it has the look of a modern glass palace wrapped in neon. Its giant, multicoloured cube 60 feet above street level pulsates with vibrant light.

The ground level lobby soars 45 feet high and the escalator that rises five storeys above street level is one of the longest in Canada. The clear, glass wall provides ascending and descending moviegoers with a dramatic view of Richmond Street. Another glass wall along the lobby at the top of the escalator and along the licensed lounge, Vivid, offers a panoramic view of downtown Toronto, overlooking John Street. The SkyDome and CN Tower are just minutes away.

Incorporated into this movie palace of the future is a bit of movie’s historic past. Above the escalator is a pair of bronze railings from New York’s famous Paramount Theatre, the opulent site of historic performances by Mae West, Bing Crosby, Ella Fitzgerald and Frank Sinatra. Closed and dismantled in 1964, the theatre was located on Broadway on the street level of the Paramount Building, a 35-story skyscraper that for 40 years served as worldwide headquarters for Paramount Pictures.

All 13 screens and the Famous Players IMAX theatre are located on one level. One screen features digital projection.

A special attraction is the stylish Club Room that can be rented for various corporate and special events and receptions.

The theatre opened on May 19, 1999 with the release of ‘Star Wars: Episode One The Phantom Menace.’ During that film’s opening week, Paramount Toronto had the fifth highest box office gross on the continent. Paramount Toronto regularly ranks among North America’s top grossing theatres.

Now operated by Cineplex, it has been re-named the Scotiabank Theatre Toronto.

I am an old-time employee of Famous Players and I want people to know that I think the Scotiabank formerly Paramount Theatre is really awesome. I have not observed shoddy film presentation on the many many times I have been there. I love the optical illusion that you are falling back on the escalator going up the 5 stories to the main floor. The sightlines and the seating are comfortable — and the screens are large. I am proud of Famous Players for building this megaplex!!!

New leather/vinyl rocker seating in all auditoriums, similar to the Ultra AVX seats! (Not sure when they installed them – new since last TIFF at least)

what are the dimensions of the IMAX screen?

I was in Scotiabank cinema #4 for The Great Digital Film Festival 5:30pm screening of “Star Trek: The Wrath of Khan” and during the scene where Bones gifts Romulan ale to Kirk I could hear the music from the Cineplex animated short “Lily & the Snowman” leaking through the walls from the AVX cinema next door. I guess because the song was a cover of the Genesis song “Follow You Follow Me”, it was on topic and this was acceptable — not. (Because Genesis is also the name of secret project Khan steals in the movie.)

On my recent visit, the Poptopia booth was shuttered in favor of a Starbucks. The box office was relocated upstairs as the former became a IMAX VR since August 2017.

There is a Melt ice cream shop and a Starbucks now, in addition to the mini Pizza Pizza. Not sure if Poptopia is still there. That said, a mini Poptopia exists at concession booths.

IMAX VR is gone, being replaced by VRcade. Also, to answer SilverPlaqueVII, the box office was not relocated per se. More precisely, it was merged with the Guest Services and IMAX desk upstairs, which is now a shell of what it originally was. There’s also tons of ticket machines upstairs.

This theatre opened on May 19, 1999, with Star Wars-Episode 1: The Phantom Menace, Midsummer Night’s Dream, Tea with Mussolini, Life is Beautiful, The Red Violin and Encounter of the Third Dimension in IMAX.

To reply m00se1111’s statement: Cineplex may have to transfer the Scotiabank Theatre name to Yonge-Dundas and VIP theatre that they acquired in 2012 when AMC departed the Canadian market. Many of its functions like an arcade, Coke Freestyle, party rooms and Outtakes would be relocated there. During the day, some of the auditoriums are used by Ryerson.