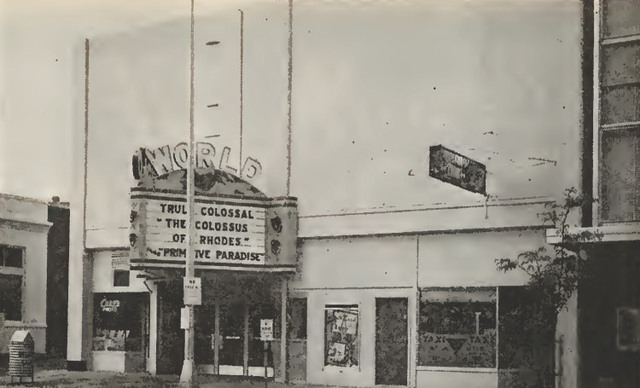 Myricks Egyptian Theatre opened at this location on March 15, 1924, in the building formerly occupied by the Strand Theatre, which dated back to at least 1919. E.J. Myrick’s opening program in the Egyptian inspired showhouse was Mary Pickford in “Rosita”. Other theaters in Billings at this time were the Babcock Theatre, the Regent Theatre and the Jazz Theatre.

On November 5, 1924, the Billings Gazette announced that the Egyptian Theatre had been sold to Lloyd Pennington of Lebanon Kansas. Mr. Myrick’s reason for selling was said to be bad health. The new owner now just called the theatre Myrick’s Theatre. On August 2, 1925, Myrick’s Theatre opened with a new name. It was now called the Lyric Theatre and was operated by Duncan & O'Keefe the operators of the Babcock Theatre and Regent Theatre. They gave it a complete remodeling but by May of 1926 an announcement was made that it was being turned into a second-run house.

I reopened on October 22, 1931, after a $25,000 remodeling program to the plans of architectural firm McIver & Cohagen. At this time Max Fregger was the operator and Dr. James Chapple owned the building. McIver and Cohagen, the architects, designed it with extra fire exits and a roof that could stand 50% more than the normal snow load. Other improvements were to the ventilation system, interior design, marquee and the addition of a large vertical neon sign.

Moviegoers to the ‘modernistic theatre’, which was described by Dr. Chapple as one of the outstanding small theatres in the state, got to see Barbara Stanwyck in “Ten Cents a Dance”.

A $40,000 fire of undetermined origin heavily damaged the Lyric Theatre on the morning of March 22, 1955. On May 27, 1955, William Dollison, owner of the theatre, reopened the renovated Lyric Theatre as the Dolly Theatre. It was described as ‘Completely new from floor to roof and from entrance to exit’.

On March 11, 1962, the regular Dolly Theatre advertisement contained the following announcement: The Dolly Theatre Will Close down Mar. 12-14 to Make Way for the All New WORLD.‘ 'Unique Films from Around the World’. The new operators were Theatre Operators, Inc., who had purchased the theatre. Ross Campbell, its president, said in a 1963 article in Boxoffice magazine that the theatre redecoration, with the exception of a rebuilt marquee, had cost less than $1,000. Campbell said he installed drapery from his closed Orpheum Theatre in Sheridan, Wyoming and the theatre staff did the redecoration in only three days. They were fortunate that the landlord covered the modernization of the building’s facade. 1963 photos of the World Theatre show that any of its Egyptian style heritage had been completely removed giving it a 1960’s minimalist appearance. Even though previous Gazette articles had put seating at 575, it had 443 seats at the time of the remodel. The first presentation under their art house policy was from England, Alec Guinness in “Tunes of Glory”. Later their program consisted of first run mainstream movies. It closed in 1978 and was soon demolished and today a parking lot occupies the site.

A March 23, 1955 article in the Billings Gazette lists the address of the Lyric at 14 N. Broadway, which corresponds with the map view.

World and Egyptian grand opening ads in the photo section for this cinema. 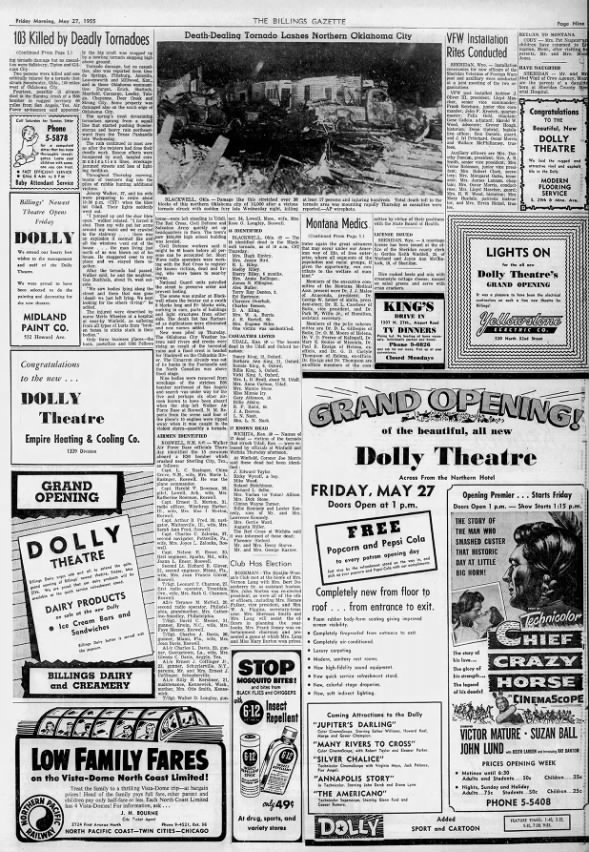 The Billings Gazette provides this web page about the theaters in Billings, and it says that the World was closed in 1978 and demolished to provide parking space for a bank. The following year Theatre Operators, Inc. opened the World West Theatre at Rimrock Mall, its name probably being a tribute to the chain’s lost downtown house.