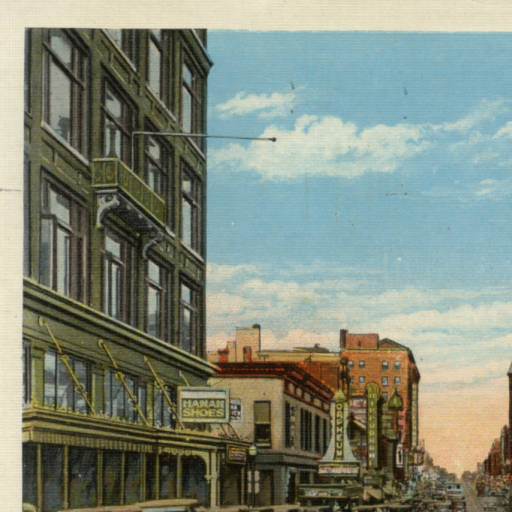 The Orpheum in Joplin is mentioned in various issues of The Reel Journal as early as 1925. If the theater was built for the Orpheum vaudeville circuit, it could date back quite a bit farther. Orpheum expanded very rapidly in the region through the first two decades of the 20th century.

Like other major downtown Joplin theaters, the Orpheum was long operated by Fox Midwest. In 1952 it was of many Fox houses put up for sale to meet the requirements of the consent decree in the Federal antitrust case against the company.

After closing the house for awhile, Fox finally disposed of the business and leased the theater to an independent operator named P.D. Crockett. According to the August 28, 1954, issue of Boxoffice, Crockett intended to reopen the Orpheum on September 2. I’ve been unable to find any later references to the Orpheum in Boxoffice.

In this 1936 color postcard can be seen the Orpheum Thetare (click image to enchance view). Next door was the Hippodrome Theatre, and across the street sat the Paramount and Fox theatres.
View link

Judging from google maps (528 Main) street view, the Orpheum was of Colonial style arthitecture.
Probably the Hippodrome Theatre was that double arched “nickelodeon” style structure next door.
Still trying to figure out exactly where the Paramount Theatre sat across the street.

As Seymour Cox says, the Orpheum was located at 528 S. Main Street. The building it was in was called the Zelleken Block, which was built no later than 1891 and originally housed retail stores on its ground floor. A theater occupied the space circa 1909, as the Orpheum had the same address as that given for the Ideal Theatre, seen in this ca1909 photo.

The building has not been demolished, by the way. It is now part of Joplin’s Sunshine Lamp Historic District, to which it is a contributing building. I don’t know if much (or any) of the theater remains, though, as it was reconverted to retail space so long ago.

The Orpheum had a Reproduco organ.

I’m reading the book “The Secret Life of Houdini” it mentions that Houdini started touring the Orpheum vaudeville circuit around 1899. It states he was billed as “The Wizard of Shackles, A Man of Marvels” also just “Man of Shackles”. In Joplin, MO., he decided on the billing “The King of Handcuffs”. I’m just wondering if this would be the same Orpheum Theatre as mentioned in the book.

Motion Picture Herald, Aug. 21, 1954: “The Orpheum Theatre. Joplin, Mo., will be reopened September 2 under new ownership and management. P. D. Crockett, of Webb City, is the new owner. He said negotiations for the purchase of the theatre were completed a short time after the theatre was closed last May by former owner, Fox Ozark Theaters, Inc., of Kansas City.”