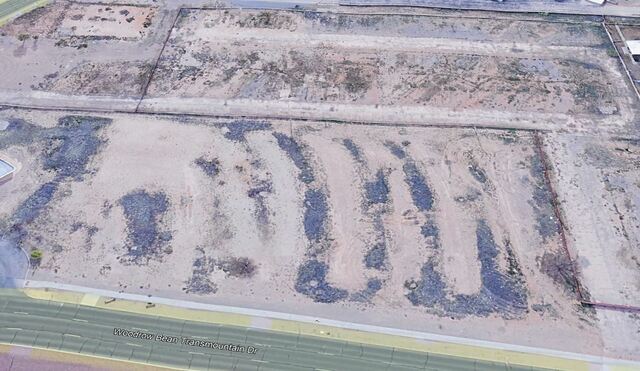 The Cactus Drive-In was another single screen ozoner in El Paso. It opened January 21, 1953 with Joan Caulfield in “The Pretty Girl”. The car capacity was given at 500 cars. It was closed in 1966 and has since been demolished.

Does the book mention the Rocket Drive-In? The Rocket was on Dyer, a little further out than this one I believe, And I don’t recall the Cactus name at all. This could be an AKA….

The Rocket was way out in the boonies, but the city has grown a lot out that way since then.

I believe the Rocket and the Cactus may have been the same drive-in. I scoured the 1967 aerial photos for Dyer Street, which were a good resolution, and could clearly see the drive-in at 10405 Dyer St., but there was no 500 car drive-in at 9981 Dyer Street.

Both the Rocket and Cactus are listed as being 500 cars. The Rocket supposedly opened in 1965, so both should have been clearly visible in the 1967 aerial photos.

Unless someone can produce a newspaper ad which shows both drive-ins operating in the same year, these were probably the same drive-in, operating as the Cactus from 1952-1964, and then as the Rocket from 1965 to around 1980.

It would not be unusual for the IMPA or other theatre catalogs to contain misleading or inaccurate information. Can anyone vouch from first-hand experience that both drive-ins operated simultaneously from separate locations, or does the idea that these were two distinct drive-ins originate solely from information pulled from the almanacs and theatre catalogs?

I lived near Dyer St. in the 60’s and 70’s and only recall one drive-in out in that end of Dyer. And it was the Rocket. Nearer to my house on Dyer was the Del Norte. And it was the one we visited the most of the drive-ins. Being military, we did spend more time on post at the cheaper theaters :)

Andress High School is having our 50th school anniversary and we are looking for pictures of the drive-ins, Rocket or Cactus. Does anyone have any? Know of any web pages where I can find them?

The Rocket was two miles past the Cactus, on way out of town. I have photo of Cactus. My dad owned it, it was brought down by Eminent domain laws to build Trans Mountain road where it stood.Where do I send photo?

rgkettle..you can email to and I can post them.

However, in the 1967 aerial photo, you can see the remains of the drive-in rows to the South of the new Trans Mountain Road.

I remember hearing the blasting of the mountain during road building through the Franklin Mountains when I was in elementary school.

This opened on January 21st, 1953. Grand opening ad in the photo section.

Adding a name, Billboard, Jan. 24, 1953: “Bernie Swiney is building a new drive-in theater in El Paso, Tex., which will be named the Cactus Drive-In. It is expected to be opened soon.”

At the other end of the Cactus' life, the El Paso Times wrote on Jan. 25, 1966 that Commissioners Court had authorized buying the Cactus for $130,374 so the land could be used for the trans-mountain road. Some of that went to the landowners, “the Goodman Estate and others,” and some to El Paso Cactus Drive-In Theater, Inc.

Obviously, the Cactus filled a need, and that’s why the Rocket soon opened just a few blocks up Dyer Street.