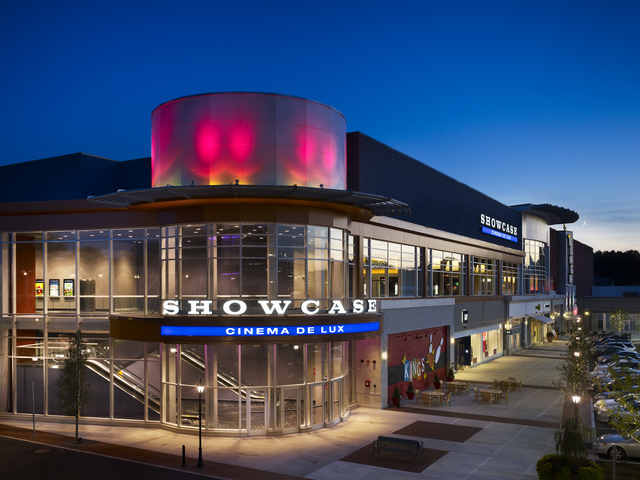 Showcase Cinema de Lux Legacy Place is National Amusements' newest, and perhaps, last multiplex. The $30 million, 91,000-square foot theater is part of a $200 million, 675,000-square-foot six-building upscale life-style shopping center called Legacy Place located on the grounds of the demolished 12-screen Dedham Showcase Cinema and the old Redstone Dedham Drive-In. The drive-in, opened in 1948, was converted to cinema parking in 1982 and National Amusements relocated its worldwide headquarters there to a standalone office building as well. The theater and the headquarters were torn down for construction of this mall, and NA is partners in the development.

This 15-screen, 2,999-seat theater, with four auditoriums offering Lux Level service, a Lux Level Lounge, and Studio 3 restaurant, officially opened August 28, 2009 and takes up the second floor of building B in the back of the mall above King’s, a bowling alley and bar. Originally, it was to have 16 screens, but fear that it would put the nearby two-screen Dedham Community Theater out of business put local pressure on the company to cut it back to 12 screens. NA eventually compromised to 15 screens with no reduction in seating and a promise to book only mainstream films to protect the artsy-minded Community Theater.

National Amusements was to rebuild its headquarters in back of the multiplex for a seventh Legacy Place building, however, the poor economic climate and the crushing debt put upon it by majority owner Sumner Redstone has put a hold on those plans, and the company continues to operate from a building it bought in nearby Norwood. A grass-covered field marks the spot where the headquarters was to be located.

The architect for the cinema and for National Amusements' headquarters is spg3 of Philadelphia. Legacy Place is named as a memorial to NA President Shari Redstone’s grandfather, Michael Redstone and to commemorate National Amusements getting its start with a drive-in there 61 years earlier.

This theatre replaced Showcase Cinema Dedham on the same site. Some of the comments on that theatre’s page are actually about this new theatre.

So Dan, why do you presume this is the last National Amusements megaplex? Their financial condition, the economy, all the other factors which will eventual reduce the number of theatres? It would seem that Clearview is the only healthy company out there. They have a reputation for improving any property they acquire – maybe that’s the key. Tney acquire – I don’t think they do much or any building.

Whether Clearview improves every property they acquire is debatable; whether they do any building is not. There’s a new build with the Clearview brand in the town bordering mine (South Orange, NJ) and there will be another opening in Hoboken, presumably before the year is over. The company has built at least four other theatres in northern NJ (in Summit, Caldwell, Parsippany and Hackettstown) in recent years. Most have tiny auditoriums with scratchy sound. I tend to steer clear of them.

I debated about using the line that it could be Showcase Cinema’s last multiplex, but I really think it may be. Majority owner Sumner Redstone has announced that he wants to sell off 80% of the theaters to pay down a huge $1.5 billion personal debt, (not caused by NA, which is profitable), leaving his daughter and NA President Shari Redstone with only 15 theaters in the Northeast (out of 118 worldwide) and its partnership in several Russian theaters. Because of the economic climate, no one has offered Sumner anything for the theaters, and he has a $800 million payment due in October. He’s defaulted once on the loan, so it could be really bad for NA.

NA does have plans to build another Cinema de Lux in Yonkers in the Ridge Hill lifestyle center set to open in 2011, but a lot can happen between now and then. As I said above, NA can’t get a loan to rebuild its own national headquarters, so things are desperate for the company. So that’s why I said it could be NA’s last new theater.

The theater had a rough opening weekend. It had a couple of power failures on different days.

You can read some comments about the theater at Yelp.com.

I sent a complaint to National Amusements via its Website about my disappointment with the design of the Legacy Place theater. I received the following answer from Joe Norman, who’s the manager there:

“Thank you for taking the time to write about your experience at Showcase Cinema de Lux Legacy Place. I was disappointed to read that your first visit to the theatre did not live up to your expectations. Showcase Cinema de Lux has many modern amenities asked for by our guests which the old Dedham Showcase did not including: Starbucks Coffee, Ben & Jerry’s Ice Cream, Famous Famiglia Pizza, Nathan’s Hot Dogs, Studio 3 Restaurant, a baby grand piano in the lobby, a family concession seating area , a coffee lounge, 2 birthday party rooms, numerous plasma TVs, high definition projector TVs in the lobby showing cable channels or DVDs of upcoming releases, and our Lux Level Lounge where you can enjoy a cocktail and a dinner either before or during your show.

“Our auditoriums have higher risers for better visibility, wall to wall screens, high seat backs for better comfort, Dolby digital sound, two auditoriums with satellite reception for events like live operas and concerts, two other auditoriums cable ready to broadcast events like Red Sox games, and three digital projectors capable of showing the latest is 3D films. While not every theatre is as large as our biggest theatre, we do have several auditoriums on the 8-15 side of the building which you did not see that are larger than those on the 1-7 side.”

Joe then offered me a “personal tour to show you all these areas including the projection booth and Lux Level Lounge. My hope is that after my tour, perhaps you will give us another chance to impress you when you want to see your next film.”

I’m afraid I passed on his offer because, for me, it’s all about the movies and not about eating or drinking my way through a film.

But my major disappointment is the size and layout of the auditoriums. Theaters 1-6 range in size from 99 seats to 180. Theater 7 has 420 seats. Although the screens are wall-to-wall as Joe wrote, the auditoriums are long and narrow. To show widescreen movies, a curtain drops down from the top of the screen to shrink it height-wise rather than curtains opening up to widen the screen length-wise. Ugh! Shades of the old Dedham Showcase!

The stadium seating starts a good way back from the screens with rows of seats in front of it on a flat floor. The viewing angle is terrible from the floor, and you’ll get a stiff neck if you try to watch a move from there. From the stadium seating, the screens are too small. The seats are uncomfortable, particularly the armests which seem too high and too short. I had circular red marks dug into my forearms from the cup holders fairly quickly because that’s where my arms wound up.

Apparently, Showcase is no longer interested in big screens with big auditoriums, such as they built in Randolph. That is so ‘90s. Now, it’s all about trying to charge you big bucks for fast food, and serving you beer and wine in the Lux Level to make even more money. Showing movies is only the excuse to get you there. This theater reminded me of a modern version of the old Copley Square Theater.

I went to a store in Legacy Place this morning so afterward I went looking for this cinema. The mall has 2 quads or squares and the cinema is located at a rear corner of the second quad, way down in back. There is a large Showcase sign up on the exterior wall. It’s in a corner location in a non-descript modern building which could double for a dept. store or a supermarket. In the front window next to the doors there were a couple of small posters, but there is very little signage. The place has Zero cinema atmosphere, on the exterior at least. There also seems to be nothing on the outside which lists what’s playing inside.

After more than a three-year moratorium, I visited the cinema this weekend because a family friend was visiting and really wanted to go to a movie.

Some things had changed. The first thing I noticed was the piano was gone and the lobby now featured some curved couches which made the expansive area look more like a hotel lobby. There were also some eating areas with tables and chairs tucked into open rooms at both ends of the concession stands for a food court-like atmosphere that I had not noticed before.

There was still a lack of signage telling people which theaters are playing what movies. The only way you know is by buying a ticket. I guess this is to keep people from slipping into multiple movies, but I saw people doing just that anyway. And there’s no signage directing you to the de Lux area, which has been a complaint since it opened. You have to just know where the stairs are to go up there.

This time I saw a movie in the other half of the theater and was able to look into auditoriums 8-15. As Joe had said previously, the auditoriums were larger, ranging in size from 139 seats to 420. But they suffered the same problem as the auditoriums on the other size: a third of the seats are on a non-raked floor where the seat backs are so high, someone who’s short has trouble looking over them to see the full screen. The auditorium-style seating starts a fair distance back from the screen, further back than I prefer.

All of the projection has been converted to Sony 4K digital projectors a year or so ago. I hope the two-year-old film projectors found a good home. The image quality I saw in auditorium 12 was fairly film-like. The sound was clear, but I honestly don’t remember hearing any stereo separation or surround effects from the bleacher seats.

An interesting note: the video projector used to display the ads before the show was low resolution and blurred by circuitry problems. If I were an advertiser, I would be angry.

The bottom line is that watching movies in the bigger auditoriums is a little more tolerable because the screens are wider and being further back is less of a problem, but not knowing which showings are in the bigger theaters beforehand is frustrating. But what I think doesn’t matter much because reviews on Yelp.com say the place is insanely crowded weekend nights despite its high food and ticket prices.

As a postscript, the plot of land in back of the cinema where National Amusements was to going to build its headquarters on is now just a field of mud.

As noted in Dan’s description, the Showcase Cinema de lux Legacy Place was designed by the Philadelphia architectural firm SPG3, which has been designing National Amusements' theaters since the beginning of the century. 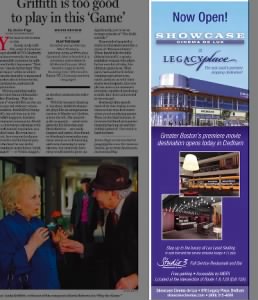