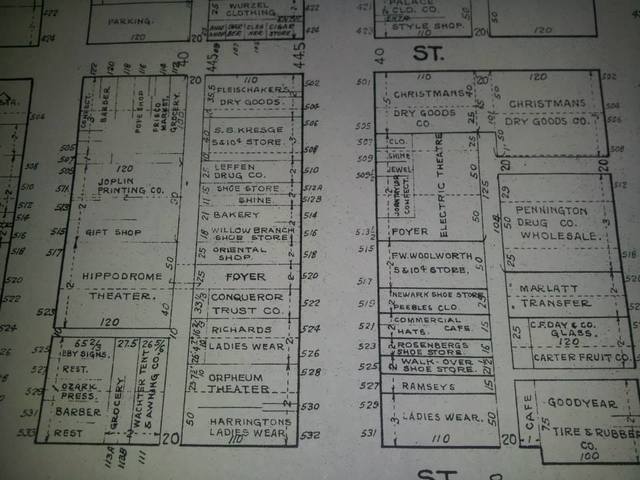 History of the Joplin Paramount Theatre is somewhat sketchy. It opened as the Electric Theatre on March 27, 1910. In 1930 it was renamed Paramount Theatre. Vintage postcard views illustrate the building was designed in Colonial Revival styling and sat one block South of the Fox Theatre. The Paramount Theatre was closed March 31, 1959.

Like its neighboring Fox Theatre, it appears that perhaps the Paramount Theatre auditorium actually was located on a back street. Only the front of the building survives, the auditorium has been demolished.

The October 18, 1965, issue of Boxoffice reported that the Paramount Theatre in Joplin was being demolished, but that no plans had been announced for future use of the property.

After examining the bird’s eye views of the location at Bing Maps, I think the Boxoffice report was correct. In the view toward the west, across the buildings on Virginia Street, the back wall of the shallow Main Street building north of the Paramount’s former entrance shows the outline of what was probably the theater balcony. The Paramount’s auditorium must have been aligned parallel to Main Street, with the entrance at the south end and the stage at the north end. Part of the auditorium footprint has some newer construction on it, but the rest of it looks like it’s used for parking. Apparently the part of the building fronting Main Street is all that remains of the Paramount. The auditorium was demolished in 1965.

Some of the earlier history of the theater is found in the trade journals. The March 13, 1926, issue of The Reel Journal carried an item announcing Grubel Brothers' intention to remodel their Electric Theatre at Joplin. The project included rearranging the mezzanine floor to accommodate new rest rooms and a lounge, reseating the auditorium, installing a new Wurlitzer organ, and complete redecoration, with new furnishings, carpets, and lighting. The projected cost of the project was $75,000.

Other issues of the journal from that year mention the project and credit the design to Boller Brothers, the original architects of the house. The October 9, 1926, issue of The Reel Journal reported that Grubel Brothers' New Electric Theatre had been opened on October 7.

The earliest mentions of the Paramount I’ve found in the trades appeared in 1931. One of them says that the house would be presenting Publix circuit vaudeville shows, but on Saturdays only. The last mention of Grubel’s Electric I know of is from 1930, so Publix must have taken over operation of the house in 1930 or 1931. Several years later it was taken over by Fox Midwest, and appears to have been operated by that chain until closing in the 1960s.

Finding the history of the Electric/Paramount has been somewhat complicated by the fact that the name Electric Theatre was adopted sometime between 1930 and 1935 by a smaller neighborhood theater, at 1514 S. Main Street, which had opened in 1927 as the South Main Street Theatre.

Mr. Chapman must have been referring to the large, red brick bulding with rows of arches, situated between the old Christman’s and Workplaces That Work. That narrow fire escape alley and those annex ramps that seem to be attached to former fire escape exits sure look like this could have been a former auditorium.
Wonder what Artistic Alley (across the street) was all about?
Wish some local folk would fill us in on all the details.

Ignore my first comment. What I was looking at was Fox Theatre nearby. I was mistaken, and apologize for being completely off bsae.

This is the best image, dated 1961, of the Paramount Theatre I’ve found yet. Love that red upright & marquee
View link yet – – –

The surviving front portion of the Paramount Building, which housed the theater’s entrance, was added to the National Register of Historic Places in 2006. It has since been included as a contributing structure in the Main Street Historic District, which was added to the NRHP recently.

There’s a recent photo at Google Earth that shows the Paramount Building (click the image for full size.)

A .pdf of the draft registration form for inclusion of the Main Street district on the National Register of Historic Places confirms that the Paramount Theatre auditorium has been demolished. The building in the photo I linked to above that has the “Paramount Building” sign on it is not the registered Paramount Building, which is to the left of that building in the photo (confusing, I know.)

The entrance to the theater was in the building now has the Paramount Building sign on it, and the registration form gives the address of that building as 515 S. Main Street. It is not a contributing building to the historic district, as it was completely remodeled in the mid-1990s. The auditorium, as I surmised in my earlier comment, was between the Paramount building and the alley.

If anyone wants to see the registration form, the .pdf is currently available here. It also gives the correct address of the entrance to the Hippodrome Theatre and what was probably the Orpheum Theatre, though the Orpheum is not specifically named.

This early day postcard view depicts an artist’s rendering of Christman’s Department Store. The low building partially obscured by the interurban street car would later be occupied by the Paramount Theatre.
View link

According to information given on the above Christman postcard, “Alfred and August Michaelis architectural firm designed the Christman Building following the techniques of the Chicago style.” Since the nextdoor two story annex (that would later house the Paramount Theatre) is included in the view then it may be safe to say they also designed this structure too.

The Paramount building was built five years before the Christman Building went up in 1917. Page 48 of the .pdf I linked to above gives the construction date of the Paramount Building as c.1912. The list of Boller Brothers theaters says the Electric Theatre was built in 1912 and remodeled in 1926. It was renamed the Paramount in 1930 or 1931. The building which housed the Electric/Paramount’s entrance was actually an older structure from c.1893 that was remodeled as part of the theatre project.

Originally built as the lobby and retail frontage for the Electric Theater in 1912, the Paramount Building at 507-513 South Main Street is a two-story commercial block that has brown brick walls, a concrete foundation and a flat roof. In 1966 and 1967 flat metal sheathing was applied to the front facing upper story to give it a more modern look, but this has since been removed and the front of the structure has been restored to a more original appearance.Originally a large theater auditorium that could seat more than 1,500 was attached to the back of the existing building, but it was demolished in November and December 1965 and the theater lobby was reassigned as a retail space. Prior to the introduction of sound films in the late 1920s, the theater showed silent films and hosted vaudeville acts. In 1930 the theater changed its name from the Electric Theater to the Paramount and ended all silent films and vaudeville acts. In 1926 Wurlitzer Opus organ #1443 was installed in what was then the Electric Theater, but it was later removed and sold.