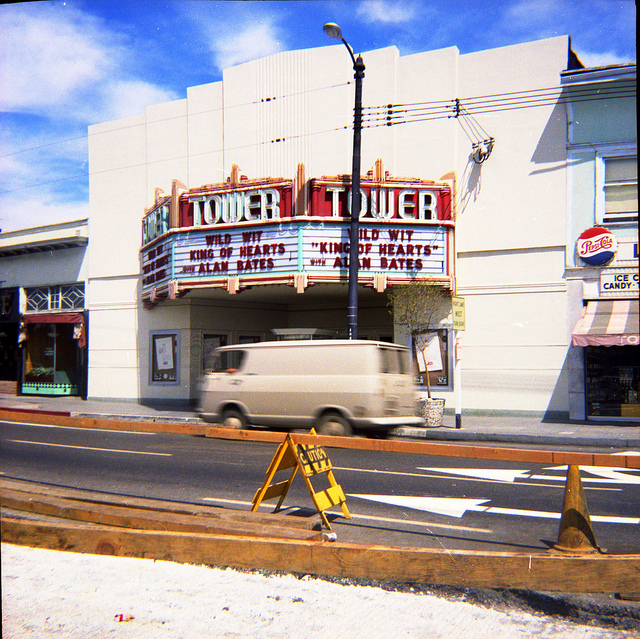 This theater was located on the corner of 51st Street and Telegraph Avenue in Oakland’s Temescal district. It opened in 1914 as the Claremont Theatre, a neighborhood movie theater.

On November 3, 1939, the name changed to the Tower Theatre. Fox West Coast Theatres operated it during the 1940’s until the 1960’s. Starting in the early-1950’s, the theatre specialized in foreign and art films.

The Tower name disappeared in 1977 and was replaced by Pussycat. Neighborhood activists spent many years trying to get Pussycat out of the theatre. The Pussycat Theatre was shut down in October 1989 due to the Loma Prieta earthquake.

It then sat empty for several years until a fire damaged it and then in December 1998, the city of Oakland demolished it. The site now sits empty with a chain link fence surrounding it. There has been much debate about what to do with the site, but a theatre does not seem to be an option.

The Tower’s original name was the L.D. Purdy Theater; it became the Claremont in 1916.

The Tower Theatre was located at 5110 Telegraph Ave. and it seated 600 people.

When it operated as the Tower, adult films did well here. Films that did have long runs here included “Les Amants”(aka The Lovers, 1959) and Putney Swope(played for many months in 1969) Last Tango in Paris did well here as second-run. Also playing here, Andy Warhol’s Frankenstein (in 3-D) and Andy Warhol’s Dracula, Together(Marilyn Chambers' film debut as well as Wes Craven’s directing debut in 1972), and Succubus(1969)

Vincent Miranda was my God Father and owner of the pussycat chain. I have been putting a collection together of ANYTHING Pussycat. I would really like to locate one of the old marquees…you know..the oval w/ the Ms. Pussycat and “It’s a Pussycat theatre” Even an old match book would make my day. I have been able to find pics of The New View (Hollywood cat) and The Tiki ( The Tomcat) but that is all I have found so far. My goal is to locate a pic of each California Pussycat. If you have any information..please let me know.

A while after it had opened in New York in August of 1947, Vittorio De Sica’s film “Shoe Shine” played at the Tower for three weeks. That shattering neo-realist movie about the aftermath of World War II and life in a boys' prison was distributed at the time by Lopert Films, Inc.

I’m sure that anyone living in the vicinity of a neighborhood theatre would be proud to have Vincent Miranda and his fine group of business partners open a Pussycat Theatre there. I’m sure the Loma Prieta earthquake in 89 was the “one brightside” for the area residents of that theatre.

Here is a December 1951 ad from the Oakland Tribune:
http://tinyurl.com/cqhhcj

This opened on November 3rd, 1939. Grand opening ad in the photo section.