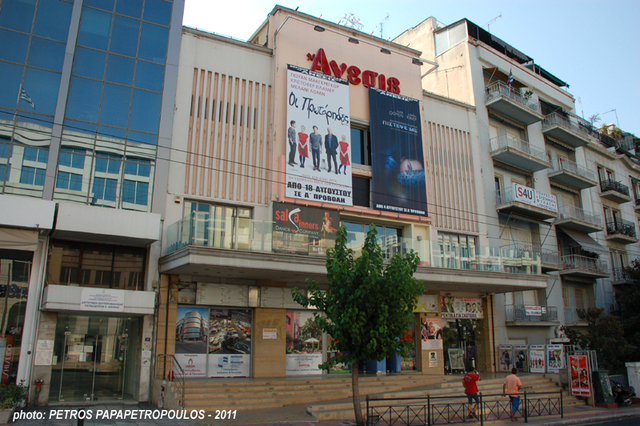 The Anesis Cinema is a classic movie theater with a big screen and a balcony. It is decorated outside with blue neon lights and has two giant hand-painted posters of the curent playing film and the next “coming soon” film … propably the last one in Athens.

It was built by today’s owner’s (Konstantinos Chapsis) father … Mr. Vasilios Chapsis, in 1959. On the roof of the movie theater, is constructed a 200-seat open air movie theater, but only for Summer use, when you can watch your favorite movie at a romantic mood under the stars!

The cinema inside, has kept the special architectural character of the 1960’s combined with luxurious finishes. It underwent a renovation in late-2004-early 2005. It is now used as a multi-purpose entertainment centre, with theatre use for plays and musical performances in only a section of the original auditorium using a small entrance. The main original foyer is in retail use and the remainder of the cinema is unused.

Thanks Themistoklis,very nice story.Love the open air part of the story.

Anesis does not exist any more. From 2005 a little part of the old auditorium is kept and transformed to a small theater, which does not remind the old movie theater at all. The wide entrance also is transformed to a shop and now there is a small new entrance. The large foyer on the 1st floor is also abandoned.