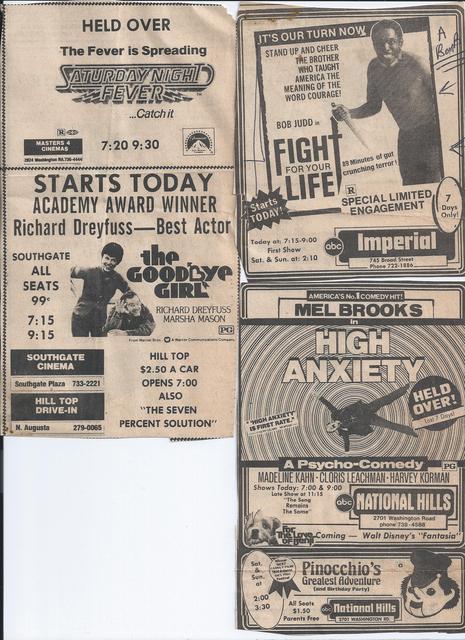 Southgate Cinemas was located in Augusta, in Southgate Shopping Center. It was a nice single screen theatre with great seats, a large marquee, and a dual projection booth.

Any Southgate moviegoer will tell you that the screen and theatre were both fine, but the concession stand was the pits. In fact, as lobbies go, one of the worst ever. And the restrooms were very tiny.

It opened on Friday, December 18, 1970 with the classic "Love Story" starring Ali MacGraw and Ryan O'Neal. This film played at Southgate Cinema for several months.

Southgate played a lot of United Artists movies – almost all the 007’s played there along with the first X-rated movie to play in a suburban theatre, "Beyond the Valley of the Dolls". Southgate also played "Hello Dolly" and "Soylent Green" had a long run there.

The theater seated I guess close to 500 people, and it stayed open until the late-1990’s when it was reduced to a dollar cinema. It became a church, who had moved out by 2016.

While playing golf in Augusta, Christopher Lee attended the 1st Augusta showing of "Man With A Golden Gun". He writes in his bio that he drove down I-20 from Atlanta to Augusta. Most stars fly into Augusta - Christopher Lee took a limo. I should’ve gotten down there but at the time I wasn’t yet driving!

Ellen Carter managed Southgate Cinema for 19 years. She was there during the first run films, and sadly closed the theatre with "Supercop" - all seats one dollar.

I believe all projection equipment is still in the theatre, and I assume the screen is still up. However, Georgia Theatres has a history of butchering a theatre once they move out. So the screen could be gone since it’s now a church. Guess I could drive over and check it out. I think there would be a market on that side of town for a theatre, but I also think the people that would attend would quickly tear it up.

I worked at Southgate Cinema from May of 1971 until September of 1972. I was 17 years old. I loved the movies and enjoyed working at a “real” theater. Mr. Andrews was the manager then. Mr. Griffith was the projectionist. It was a union projection booth that I was rarely allowed to enter. The box office was a tiny booth that had an exterior window (to the right of the doors) for selling tickets. There was a stairway behind the box office that led to the projection booth and the managers office. The box office lady was related to Mr. Griffith — I believe it was his daughter-in-law. Mr. Griffith’s son (I think it was his son) was also a projectionist and filled in occasionally.

The auditorium was draped in gold curtains. Access to the speakers and storage area behind the screen was to the right of the screen.

Mr. Andrews and Mr. Griffith would view the film before opening day looking for any nudity or obscenities. Mr. Griffith would cut objectionable material from the film, saving the trims on this editing desk. Before returning the print to the studio, the excised footage would be restored. In the days of 35mm film, there were often splices just before and after nudity scenes as many theaters across the county would cut and restore “objectionable” material from the prints.

Adam West and Burt Ward walked into Southgate Cinema one night. They came late, 30 minutes after the start of the last showing. I was alone in the lobby and sold them tickets and concessions. When they told me who they were, I didn’t believe them. They insisted that they were actually Batman and Robin. I asked them to show me their driver’s licenses. They did. It was them!

That is crazy cutting films. I knew they did it at the HILLTOP because the outdoor screen faced a busy highway..go figure..

Drove by the old SOUTHGATE today, front doors wide open,, VANDALS at work, Notice the concession was gone, It had become a church,,walked in the theatre, looked like screen was ripped, sorta expected to find seats, but they were all gone,,BOXOFFICE ticket machine still there with cash drawers had never been upstairs, saw the small managers office right next to the booth, two PEERLESs projectors there, knocked around, I had thought later on the theatre went with platters, never did, carbon arc I guess to the last showing..BOOTH filled with trash,,,marquee letters everywhere….

no I didn’t have a camera…….spur of the moment thing….

I drove by here on Thanksgiving, and I was a little worried. Too many random people around. I can’t believe the building is still there.

I remember a girl who worked the concession counter at Southgate: Betsy Lynch from Butler High School. I was smitten with her beauty and personality. I was happiest when Betsy and I had the lobby to ourselves and could talk about “everything”. Each and every day I would ask Betsy to wear her hair down. She never did. Not one single day…that is until I took another girl on a date to the opening of the Godfather at the Miller on March 24th 1972. The next night, Betsy came to work with her hair free flowing. Betsy…..I noticed!

SOUTHGATE and SOUTHSIDE CINEMAS now have a facebook page..