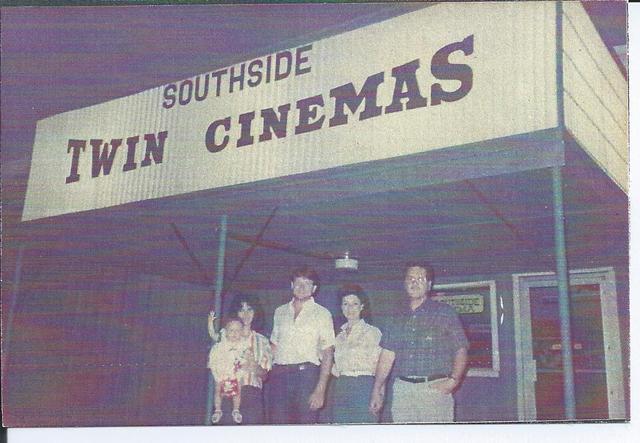 Southside Cinema in Augusta was a labor of love. Ray Hutto, an avid theater lover, broke his teeth in the business at the Highway One Drive-In in Augusta. For years he would show 16mm films to charity organizations in the city.

In 1982 Ray decided his side of town was very much under screened, meaning no theatres! He opened Southside Cinema in June 1982 with the classic "Chariots of Fire". His theatre held 242 people, and often 600 moviegoers would show up for a movie in the early years.

He devised a way to use carbon arcs last without having to change carbons, hence having to shut down the movie since he used one lamp. Old projectionists will know what I’m writing about.

He showed 35mm movies first-run and quickly realized the film rentals often would strain his budget. Southside Cinema had the cheapest concession stand prices in the state of Georgia! Like I said it was a labor of love. Anyone in the theatre business will tell you concessions run the theatre.

Ray decided to twin Southside in 1984, and each twin held 121 seats. The distance from the booth to the screen gave Augusta it’s brightest picture. He ran the theatre with his wife, Bonnie, and a few employees. He tried to show only PG movies but sometimes would show an R rated film. When cable TV - HBO - Cinemax finally got to that side of town Ray could see the writing on the wall. He lamented VHS rentals were the hot item. It’s a killer for the small showman!

Southside Cinema did not go unnoticed by the big boys. When I was working for General Cinema, the company had Craig Zacker and myself drive out to Ray’s theatre for a look-see. Ray was quite proud to run a trailer for us to watch. I attended several movies at Southside, and Ray would always say, "no charge". I did insist on paying to see "In Search of Spock".

Ray said for about two and a half years the theatre really did do great business. It was located out far enough to pull in moviegoers from nearby Burke County which had long lost a drive-in, and their old downtown theatre had burned to the ground in the 1970’s. So he had a nice population to pull from. The Southside Cinema closed in June 1985.

August 27 1982 Southside Cinema is playing “RAIDERS OF THE LOST ARK” and Ray has a Western Film Matinnee on Saturdays,This day was ‘LONE PRAIRIE" and “RED RIVER VALLEY”.

Thanks Nick.I let Ray know about the Picture.Figured he would have gotten on by now.So it Goes.

“Raiders of the lost Ark” plays here after playing forever at Weis Cinemas and a couple other screens.Ray is charging $1.00 a seat two shows nigthly.August 27 1982.

Ray started out showing 16mm movies to friends and local groups,then he decided to open a single screen 35mm Theatre,later to Twin it, In a few years it was all closed.Gone. Today, Ray Hutto is back showing 16 mm movies to retirement homes in Augusta,He was showing"THREE LITTLE BRUINS MAKE MISCHIEF".

Augusta lost a great showman May 21 2014. RAY HUTTO passed away, this man built his dream the SOUTHSIDE CINEMAS,,Ray, you loved Theatres, Film and westerns..