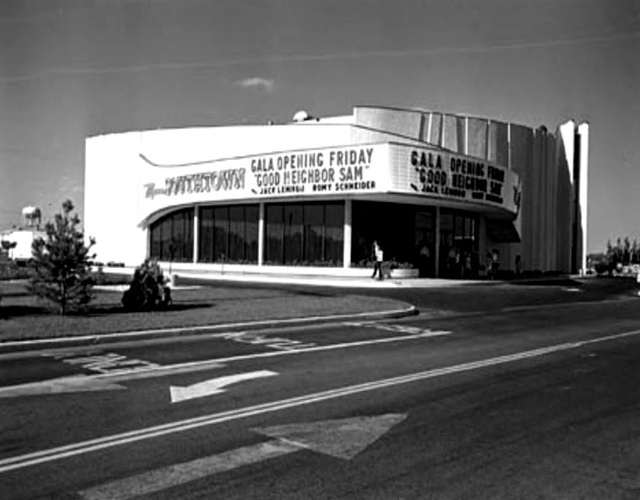 Located in the southern Minneapolis outer ring suburb of Bloomington. The Southtown Theatre opened August 7, 1964, at the Southtown Shopping Center, the first shopping center/theatre combination in the Twin Cities. Built for the Mann chain, the theatre was designed in a futuristic modern style, and its auditorium sat over 1,100.

Its marquee was one of the longest ever built, and wrapped around the entire front of the theatre. The Southtown Theatre was said to cost upwards of $750,000 and was personally opened by Ted Mann himself on opening night.

Other amenities the Southtown Theatre included was a colossal screen, 70 by 36 feet, a pair of fountains in the lobby, an oval shaped candy counter, and smoking loges. It was hailed in newspaper advertisements around the time it opened as “The Comfort Theatre of Tomorrow!”

Its first decade in operation, the Southtown Theatre primarily screened second-run features, though it was used by Mann on occasion for the Twin Cities premieres of several films, which soon afterwards were moved to his Academy Theatre downtown.

In the mid-1970’s, the Southtown Theatre became a first-run house, known for screening blockbuster commercial hits like “Close Encounters of the Third Kind” and “Superman” on its huge screen.

In 1980, the Southtown Theatre was twinned, and its great screen was lost. Some of its 1960’s decor was removed at this time as well, including its outdoor box office. The theatre was closed in fall of 1995 and razed soon after.

I would appreciate it if someone would email me photos of the Mann Southtown Theater (exterior/lobby, especially!). I am also looking for a picture of the old Valley West Theater which was located in the Valley West Shopping Center. I know it wasn’t near as fancy as the Southtown Theater, but it would mean alot to see a photo of it. The building is now for sale (again. Whenever I see the building I can’t help but remember the oversised red velvet draperies that once hung on the windows in the lobby. My email address is I love this website!!!

Here is a circa 1968 photo of the Mann Southtown (third photo from the top):
View link

Here is a more close-up view of the same photo (scroll down to bottom):
http://tinyurl.com/2ebvv5b

Sorry it ended I was enjoying the “STAR WARS” debate.Budyboy100,if you are still around.Michael knows his “STAR WARS” movies He corrected me on it and I was a Dang Theatre MANAGER!!!!!!!!!

They hosted a Star Trek (1-5) marathon there one Saturday which was a lot of fun…..will never forget they trumpeted the twin cities premiere of the ST6 trailer which the audience went nuts for…

I also had the privlege of seeing The Empire Strikes Back there. It was the only time I ever saw a movie there.

I saw a lot of movies there. I remember seeing my first Bond movie there. I also saw the now banned “Song of the South” there. Too bad it’s banned. It was great movie. The last movie I remember seeing there was Star Trek/the Search for Spock. I hated it when they tore it down. Bloomington has no theaters anymore, and the Mann was the last.

I saw a lot of movies there. I remember seeing my first Bond movie there. I also saw the now banned “Song of the South” there. Too bad it’s banned. It was great movie. The last movie I remember seeing there was Star Trek/the Search for Spock. I hated it when they tore it down. Bloomington has no theaters anymore, and the Mann was the last.

Does anyone have any pics of the interior of the Southtown theater? My favorite movie memories took place there, Seeing SUPERMAN, STAR TREK THE MOTION PICTURE and EMPIRE STRIKES BACK. I would absolutely love any pics that anyone has, especially when it was one screen. You can email me at

Grand opening ad in the photo section from August 7th, 1964 and below.