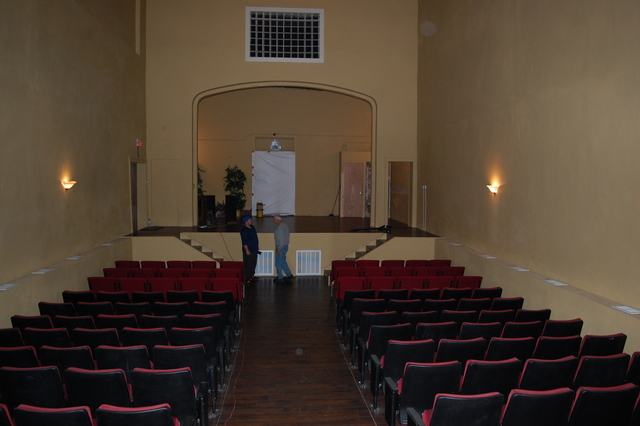 The address given here is incorrect. The actual address for the Ritz building is 1145 Military Avenue.

According to this article, the last use was as a florist’s shop. Looking at Google Maps, I believe it might have been one of the now-empty store fronts to the left of the appliance/furniture store.

After doing some more exploring, I was off on the address myself. I still say it’s not 117 North Military. The only thing in that area in the Baxter Springs High School, and residential roads.

It is also not 1145, which was the flower shop at one point, and possilby the New Baxter as well as the original location of the Blue Castle Restaurant, as mentioned in the article I forgot to link .

THIS theater, the Ritz, appears to have been at 1190 Military Avenue. If you Google Map that, the building before you is the former Blue Castle Restaraunt, as confirmed by the pictures on this page (search for “Baxter” on the page"). This was the Ritz Theater, and the the Blue Castle Restaurant. It’s now boarded up and disused.

There’s something extraordinarily weird about Baxter Springs. The numbers on North Military Avenue get larger as you go south, instead of smaller as you would expect. Then, after the 300 N. block, the street name suddenly becomes just Military Avenue, with no north or south. But the numbers keep getting larger as you go south. Perhaps the city fathers of Baxter Springs were a bit confused about the concept of direction?

I think Phantom Screen was right the first time about the location of the Ritz. It must have been in the building with the boarded up restaurant on the northwest corner of Military and 12th, but the address of that building is not 1190, despite what Google Maps says. If you look at the building directly across the Avenue from it, there’s an establishment called Hatbox Photography. Looking up Hatbox Photography on the Internet, I found its address to be 1144 S. Military Avenue. Thus, the building across the street must be 1145 Military Avenue, the former home of the Ritz Theatre.

The Ritz was opened in 1926. The April 10 issue of The Reel Journal reported that the building, owned by John I. Cooper, was under construction and would be completed about May 1. (I think the building looks a bit too old fashioned to have been newly built in 1926, and was probably a conversion from some other use, but perhaps Mr. Cooper just had a very old fashioned sense of style.) The theater was being outfitted by Yale Theatre Supply Company, and would have “…416 upholstered seats, according to J. H. Toler, of the Yale Company.” Other issues of the magazine indicate that the Ritz was originally operated under a lease by C.A. Rehm.

There were also theaters called the Elite and the Majestic in Baxter Springs at the time, mentioned in issues of The Reel Journal as far back as 1925. I haven’t found the Majestic mentioned after that, but the Elite was mentioned as late as 1929. It’s possible that one or the other of them became the New Baxter Theatre.

A report on a fire at the Ritz in the July 15, 1944, issue of Boxoffice referred to the theater as “…the Commonwealth second house in Baxter Springs….” Commonwealth also operated the New Baxter Theatre at the time.

The March 7, 1957, issue of Boxoffice has an item that says “The building of the Ritz Theatre at Baxter Springs, Kas., has been sold and will be remodeled for a restaurant operation. The purchase was made from the Cooper estate.” As the item specifies the building rather than the theater being sold, it sounds as though the Ritz might already have been closed for some time before the sale took place.

Baxter Springs gets a surprising number of mentions in the trade publications, and it would take quite a while to sort through the lot of them. This comment is stuff gleaned from a handful of them that looked most significant to me. Maybe I’ll have time to dig up more about the town’s theaters at some future date.

The Ritz Theatre was added to the Register of Historic Kansas Places on November 8, 2014. The Registration form (PDF here) says that the theater officially opened on April 30, 1926, and that Joplin architect T. E. Martinie handled the conversion of the building from its former use as a dry goods store into a movie theater.

We were fortunate enough to receive a guided tour of the Ritz Theater renovation from the owner, Jim Puckett, yesterday while we were photographing along Route 66. He, along with his wife Judy, have been faithfully restoring the Ritz for 9 years, and they are now within a couple of months of opening for screenings and shows from local artists. It will be ready to go sometime in January, though they would love to do a screening of “It’s a Wonderful Life” this Christmas if possible. Pictures of the interior renovation have been posted in the photo section. The theater looks great, and I wish the Pucketts the best of luck. Can’t wait to get back to see a show sometime in the future.

Status should be closed: renovating

Thank you for posting those great pictures of the Ritz’s interior. I wish the owners great luck as they continue to get this theatre operating again.

Circa 1957 image added courtesy of Route 66 Postcards Facebook page. The white building on the corner down the street on the left, is the former Ritz Theater which we know closed in 1956. There is a `57 Plymouth at the curb, so likely about when it was being converted into a restaurant. The marquee and blade sign are already gone, but a replica blade sign was added years later according to previously posted photos.