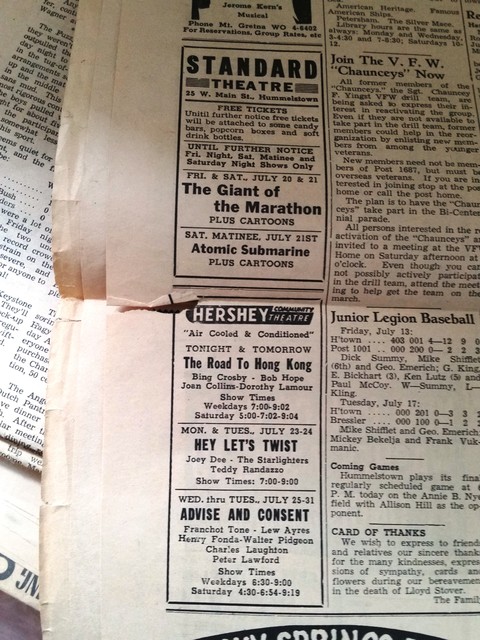 Located near the square at 25 W. Main Street in Hummelstown PA, the Star Theatre was opened around 1905. Around 1930 it was renamed Royal Theatre and was your typical small town neighborhood theatre with about 300 seats all on one floor. It was affectionately dubbed "The Rat House" because of rumors that you could supposedly feel creatures crawling over your feet during the show. Around 1951 it was renamed Standard Theatre and lasted until closing in 1976.

The building is now the home of Kirman Eye.

This theatre was run by Dave & Henry Keffer, Dave also owned the Rainbow Roller Rink on the Carlise Pike outside of Mechanicsburg, Pa.He later had the roller rink on Derry Street in Harrisburg, Pa. He also had the Paxtang Theatre. He always had his favorite hobby as a sound tech.

The theatre building and the next door buidling at 29 W. Main were then purchased and joined together to become what is now known as Kirman Eye.

More Info from the archives of the Hummelstown Historical Society.

The theatre at 25 W. Main Street in Hummelstown was built for silent pictures in either 1904 or 1905 by Benjamin Bombgardner of Middletown. It was originally called the Star Theatre.

With the advent of sound pictures it was upgraded and became known as the Royal Theatre.

According to the Historical Society the theatre closed in 1976 when it was purchased by Skip Smith as an antique shop for his daughter.