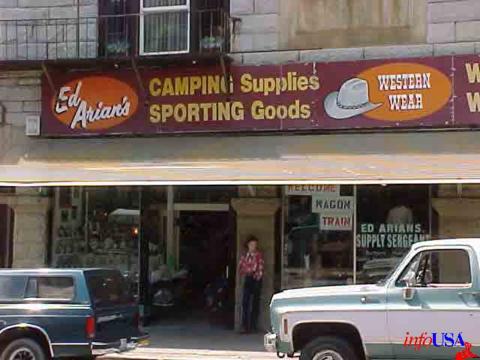 The El Dorado Theater was located at 469 Main Street, Placerville, across the street and up the block from the more famous Empire Theatre. It was housed in the Upper Fairchild Building (now the Arian’s Supply Sergeant).

It opened under Ruth Knacke’s management in April, 1936. The theater was located on the lower floor of the building, large enough to accommodate 500 seats. Ruth Knacke, who owned the Empire Theater bought the El Dorado Theater in order to prevent further competition with her theater. The theatre was closed in 1940.

There are several news paper accounts of the seating, but the El Dorado Historical Society said 500 seats. One account in the local paper says 300, so it could be true that is was 280.

An August 20, 1938, Boxoffice item that reported the sale of the Empire and El Dorado theaters to Fred and Lee Naify said that the El Dorado had 300 seats and the Empire 600 seats. Both figures were probably rounded off.