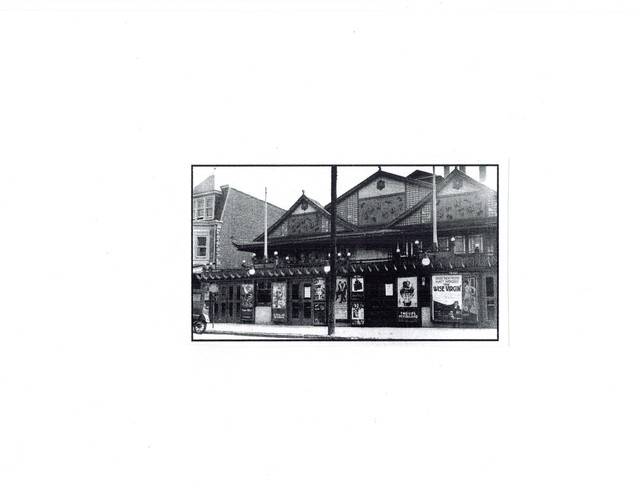 There was also a San Toy Theater in Lonaconing MD; it’s CT # 20934. Around 1900, there was a hit musical show “San Toy” which played in both London and New York.

The website for San Toy, OH says that the musical show “San Toy” was a “flop”, but it was a huge hit in London, and then opened in New York at the New York Theater (which was part of the Hammerstein complex on the east side of Times Square, and later renovated into a Loews movie theater, demolished circa-mid-1920s). James T. “Jimmy” Powers was the star, and the show played for 168 performances, which was not a bad run in those days. It opened in NY on Oct. 1, 1900. It probably toured for 2 or 3 seasons afterward. Source: “American Musical Theatre” by Gerald Bordman, Oxford, 2001.

The San Toy in Reading was located adjacent to the busy railroad tracks in Reading. This proved a problem once sound was introduced as the trains going by not only made it difficult to hear the sound. This in one reason the theatre did not survive long.

Muviebuf, could this be the building that became the Ritz Theater in the 700 block of Penn St.? I know that was just a couple of doors north of the railroad.

OK, if it was at Front and Green Sts., then it would have been right next to the Reading Railroad’s Lebanon Valley Branch. I’m sure they got lots of train noise.

The San Toy Theatre in Reading had an M.P. Möller theater organ, Opus 3087, installed in late 1920. The January 3, 1921, issue of the Reading Times said that the recently-installed organ was attracting many new patrons to the house. The first organist for the San Toy was Harry Baird. In 1927, the instrument was being played by Mabel Stoudt according to the November 10 issue of the Times.

The May-June 2006 issue of a Reading Area Community College publication, the Front Street Journal, had a feature article about Front Street which said that the San Toy Theatre opened in August, 1914, and closed in 1933. The theater was designed in an Oriental style.

The San Toy was reopened in 1936 by Harry J. Schaad who bought the theatre at a sherif’s auction. A fire in 1939 ends its run.