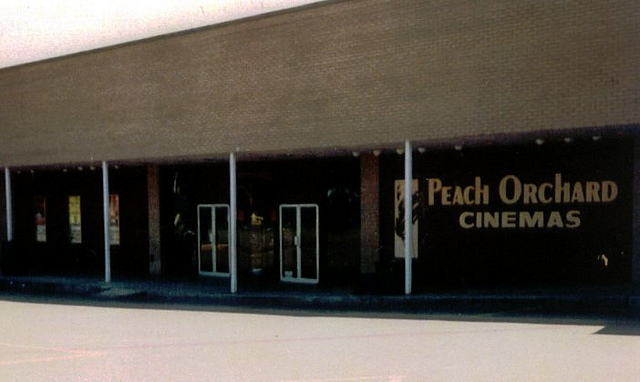 Weis Cinema Centre was a twin theatre built inside an existing building at Peach Orchard Road in Augusta. The two theatres were built on a wooden floor raised off a concrete floor. You could always tell you were walking on a raised floor.

The theatres opened August 13, 1973 with the movies, "American Graffiti" and "Golden Voyage of Sinbad". It was Augusta’s first twin theatre. It never had a marquee, and unlike other theatres in Augusta it used non-union projectionists. Not so much it was anti-union, but Local 518 were afraid it might get raided because Weis would play X-rated movies like "Story of O", and the X-rated "Dracula". The Weis Drive-In on Highway 25 did use union projectionists in the early days.

They didn’t have a long run with late shows. The theatre was owned by Albert Weis out of Savannah, GA. He owned a pretty decent chain of several theatres throughout Georgia. A pretty decent chain for a local man. Screen-wise he owned Savannah. He also had quite a few theatres in Macon and Atlanta.

The Weis was sold in the 1980’s to Fairlane-Litchfield. They renamed it Peach Orchard Cinemas and tripled it, which really screwed up one side. It closed as a United Artist Theatre.

Today it sits empty. The seats are gone and the projection room is stripped. The plexi-glass tunnel remains.

Thanks Trey add any more that you can.

This opened on June 14th, 1974. Grand opening ad in the photo section.

WEIS! Opted for ET on AMC in the background tonight. Remembered where I watched ET first…WEIS! Same for Bambi (disturbing school field trip) and Tron, and probably others, if the mental sediments were stirred. Remember digging for change to play the Tron video machine (as called back then) in the lobby. Wow…what a flashback. I’ve only watched ET, in full, twice…second time at RO film fest in Athens. So happy I found this website! Mom still lives down the road! Jennifer

Thanks Jennifer,plez had more comments,been trying to get locals into this site….

I grew up down the road (born early 1980s) and saw dozens of movies here, both first run and the summer matinees they’d bus a whole bunch of us kids over to see from summer camp. I remember it as the Peach Orchard Cinemas – never knew it was originally named after Weis.

Saw “An American Tail” there and a few other films. I remember my parents taking me along when they went to see “The Witches of Eastwick” – ha ha. I also remember this theater played “Poltergeist II” for what seemed like forever, and I, a toddler, was terrified of just the poster alone (having seen the commercials on TV).

They did have a small marquee. The address is 2708 Peach Orchard Rd Augusta GA 30906 – there’s a Big Lots and a beauty supply store where the movie theater used to be.

After the Regal Exchange opened in 1988 (and they tended to show more kid/family movies, we all but ceased going to Peach Orchard). Maybe a few more summer matinees (which always consisted of “Hey There, It’s Yogi Bear!”, “Here Come the Littles”, “The Secret of the Sword” (starring He-Man), and any of the Looney Tunes movies) with summer camp and that was it.

Dunno if there were any interior photos taken (a shame if there wasn’t), but they lined the plexiglass hallway with these orange lights that also lined the stairs that led into each auditorium – sometimes I enjoyed going just to see the lights, nevermind the movie.

New emphasis on building south Augusta up…lots of new construction, new stores/restaurants, and new businesses. Soooooo, why not a new theater over there?? Closest theater is many miles away. But I’m thinking a new theater is about the last thing on anyone’s mind, since they’ve been without one for several decades.