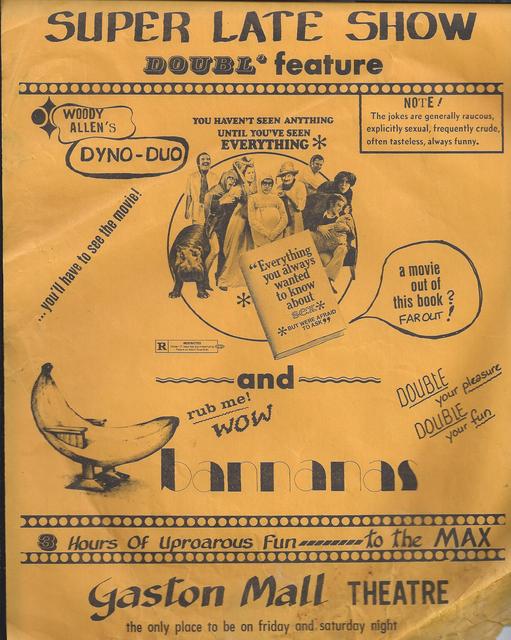 The first time I heard Gaston Mall Theatre mentioned in a town called Gastonia, N.C. I felt sick! It wasn’t anything having to do with the theatre itself. It was a truly beautiful theatre with Ultra-Vision screening, the hot sell of that time when it opened in 1971.

It was because our manager and one of my best friends John Mackey, was being transferred to this North Carolina spot. But his super promotions brought life to what was a small and dying mall. At least compared to Charlotte’s malls, it was very small.

The theatre seated I’d say 620 folks. One of John Mackey’s creation was "Uncle Oscar". He would host a "Children’s Spectacular" Saturday mornings at 11:00 AM. The Gaston Mall was the place for kiddie shows, magicians, games, prizes, and a movie were often the talk of the city. No other chain in that town would have ever thought of such a thing.

Mackey explained, "I had a vision of Uncle Oscar as an old Ed Sullivan type you know, when he’s very old. Uncle Oscar dressed in baggy pants wearing a straw hat and crazied color stripes I believe".

The Gaston Mall Theatre was billed as Gastonia’s finest, and having seen a small twin inside another Gastonia Mall, it certainly was a beautiful theatre. I remember one time while visiting, John let me do the newspaper ads for "The Spy Who Loved Me". That’s something that would have never happened in Augusta.

The Gaston Mall Theatre had Ultra-Vision projection and a curved screen. They seem to play a lot of United Artists films such as "Return of a Man Called Horse" and "Thunderbolt and Lightfoot". "Freebie and The Bean" opened to huge crowds, and according to Mackey, he sold the movie not on Alan Arkin or James Cann, but on Valerie (Rhoda) Harper and Loretta (Hot Lips) Swit. Both were co-stars but as he said, both were in the huge TV hits "Rhoda" and "M.A.S.H".

I remember the projectionist there. His name was Richard, and like so many projectionists the booth was his world. Certainy there’s a story in every booth. He told me he had worked on several movies made in the Carolinas. One was "The Last American Hero" with Jeff Bridges. He would pull cable on the set, and he said he offered Bridges one glass of real North Carolina Moonshine! On the movie "Hawmps" he built a camel and had it walking up and down the busy street in Gastonia promoting that Joe Camp family film. Yeah, it’s in your blood!

John Mackey said they ran late shows but never with the crowds National Hills had, nor with any employees in Augusta who were willing to go the extra mile to promote.

John Mackey would soon transfer to a couple of ABC theatres in Charlotte before getting out of the business - not that you ever can! The Gaston Mall Theatre closed without any fanfare. The last time I saw the theatre it had become a carpet store.

Note: I want to thank Nick DiMaggio in Tampa for helping me compile so much of this history for Cinema Treasures. I thought he and I were the only ones that liked visiting old theatres. Boy was I wrong!

I have found the original ads from the Gastonia Gazette from January 22,1971 for the Gaston Mall Theatre’s official grand opening…If anyone needs to see the ads…I can be contacted at

I should correct a previous comment I made. I work as an usher at the Gaston Mall Theatre in early 1971. I was there for Bambi, Cougar Country, Joe and a few more. Just worked there a couple of months.

THE GASTON MALL ULTRAVISION THEATRE had its grand opening on January 22,1971 with the premiere attraction of WALT DISNEY’S THE WILD COUNTRY in COLOR Starring Steve Forrest and Vera Miles…..Rated G….

THE COMING ATTRACTIONS FOR THE GASTON MALL THEATRE….

“THE OUTDOORSMAN”-The Adventure Begins in ULTRAVISION

“COUGAR COUNTRY”-Breathtaking for the whole family!!!

Basically all of the James Bond-007 films played at the Gaston Mall Theatre first-run beginning with showings of back to back Sean Connery 007 double features like “Dr. No”, “From Russia With Love”, to “Goldfinger”, “Thunderball”,and “You Only Live Twice” during there re-releases.

The Bond films did big business at Gaston Mall where they’re got first-run showings to capacity crowds from Sean Connery in “Diamonds Are Forever” to all the 007 movies starring Roger Moore all the way to Timothy Dalton as 007 in “License to Kill”…….

“License to Kill” was the last Bond movie to play at the Gaston Mall Theatre.

IN FACT…This theatre got a lot of the United Artists product ranging from the James Bond-007 films to other UA features like “Thunderbolt and Lightfoot”, “The Taking of Pelham 123”, “Electric Glide In Blue”, “The Return of the Pink Panther”, “Rocky”, among others.

The Gaston Mall Theatre was a nice showplace of great entertainment when ABC and Plitt had it(beautiful design inside and out,a huge 620 seat auditorium with a astounding 180 degree Ultravision screen)…..It was butchered by Cineplex Odeon during the late-1980’s when they twinned it.

not a carmike.. cancer….

The Gaston Mall Theatre was closed under Cineplex Odeon/Plitt Theatres in 1991. This theatre was never under Carmike Cinemas. The Gaston Mall closed way before Carmike was about to take over!

January 16th, 1971 announcement uploaded in the photo section for this cinema.

It was also known as the PLITT AT GASTON MALL under Plitt Southern Theatres.