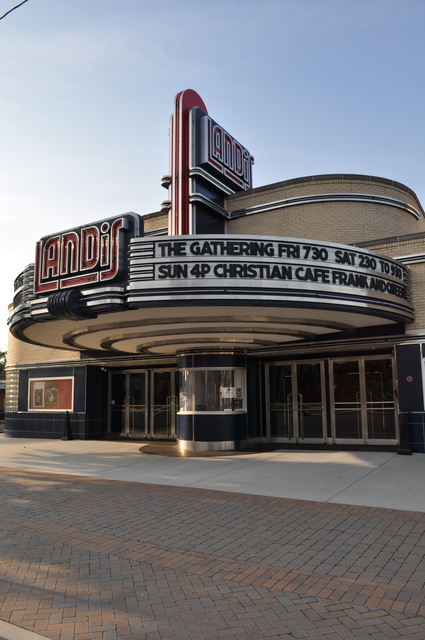 The Landis Theatre had a gala opening on March 12, 1937, with the movie “Hats Off” starring Mae Clarke and John Payne. The Landis Theatre is a splendid 1930’s Art Moderne style movie theatre. The trade magazine ‘The Exhibitor’ had an extensive profile of the Landis Theatre, and in the same issue, showcased it in an article on the use of glass brick, a then cutting edge, Art Moderne style material. Described was the ‘Zeppelin streamlining’ of the glass sheeted foyer wall to the auditorium. The foyer had portholes, another Art Moderne style feature. The women’s lounge was also mentioned, as glass brick to the exterior let in light, and lit up the exterior at night, but maintained privacy in the lounge. The original seating capacity of the theatre was 1,200.

The Landis Theatre was designed by distinguished Philadelphia architect William H. Lee, who designed or remodeled over 200 theatres. Some of the theatres he designed still show movies, including the Anthony Wayne Theatre and the Bryn Mawr Theatre on Philadelphia’s Main Line, and the West Shore Theatre (also Art Moderne styled) in New Cumberland, PA. The Majestic Theatre, Gettysburg, the State Theatre, Easton, PA, and the Miracle Theatre in Florida (also Art Moderne styled) are among the theatres he designed that have been restored for live shows.

In 1987, the Landis Theatre closed and was sold to Security Savings and Loan. With the collapse of the savings and loan, in the early-1990’s, a federal agency tookover ownership of the theatre building. In 1993, local citizens formed the Landis Theatre Revitalization Organization. The City of Vineland expressed eagerness for the theatre to be restored, but then sought to buy it so it could be demolished and replaced with a Rite-Aid pharmacy. Citizens protested, and in 1996, for a dollar, the nonprofit organization acquired the theatre from the federal agency. Volunteers moved debris from the interior, cleared clogged roof drains and patched roof holes. Fundraising was difficult, so eventually the city stepped in with a redevelopment plan for the entire area.

In October 2007, the redevelopment plan included reopening the Landis Theatre for performing arts, with the original auditorium having 650 seats and expanded stage facilities. Also planned was a banquet and black box theatre with 100 seats. On April 2, 2008, ground-breaking took place for the $6.5 million renovation. On October 22, 2009, a replica of the theatre’s original sign was installed above the marquee. The theatre reopened May 22, 2010 with a concert by Bernadette Peters. In March 2012, it was reported that after suffering financial losses, the Landis Theatre is to be taken over by Appel Farm, the Salem County arts education and entertainment complex that has operated a 200 seat theatre in Elmer for 50 years. It was closed in 2014, but reopened in December 2014 with a concert and is available for rentals.

In 2000, the Landis Theatre was added to the National Register of Historic Places.

Why isn’t there a current picture of the restored theater posted?

Somebody who has taken a photo can post it.

Phila. Inquirer article today about it being taken over by another arts organization after having gone into the red.

Unfortunately, this beautifully restored theater is once again closed and just sitting there, a victim of poor management and local politics.

With photo of lit marquee, Phila Inquirer today has a story of an orchestra concert last week-

Vineland Development Corporation is now operating the theater, basically renting it to promoters for shows. This philly.com story is about downtown Vineland in general, but has a few paragraphs about the Landis.

Recent & future events at the Landis Theater include May 7, 2022 Greg Hawkes (Founding Member and Original Keyboardist of the Cars) with Eddie Japan performing the music of The Cars. May 10, 2022 Styper. So, a lot of good to great tribute bands as well as a mix of older bands that still play good to great music. The venue is used several times a week for concerts and is rented out to Miss Tri-City Pageant 2022 for instance. I haven’t been to this theater but intend to go sometime this summer.