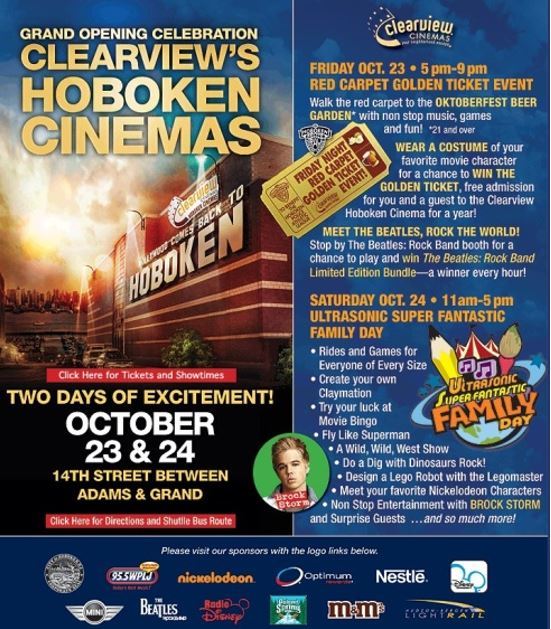 Located on 14th Steet between Adams Street and Grand Street. The Clearview Hoboken Cinemas opened on October 23, 2009. The opening films were “Amelia”, “Astroboy”, “Nightmare Before Christmas in 3D”, “Serious Man” and “Couples Retreat”.

This 5-screen theater is the newest theater to open in Hoboken and features all digital picture and sound in one screen, and two screens with stadium seating. The cinema is on two levels, with concessions and bathrooms on each level. The cinema also boasts a beer garden.

In June 2013, it was taken over by Bow-Tie Cinemas, who took most Clearview locations. It was closed in March 2020 due to the Covid-19 pandemic. The closure became permanent in April 2021.

Nice. As we learned here in Chicago, it was never about what the meters could earn. It’s about the tickets/fines that will be generated. Evidenced in the article’s “Master Plan” of the area being renamed a “commercial zone”.

That’s a way to structure the ticket fines to be higher in that “zone” than other zones. In Chicago it’s called “Central Business District”. Even though such areas includes massive residential clusters. Most living there long before the overdevelopment and the new applied “designation”.

They are $50 tickets…for a meter. Miss the payment deadline and it doubles. Amass three unpaid tickets (down from 5), and it’s the boot.
Oh, and they are 2 hour maximum. So seeing a movie and making it back to the car in time would be a stretch.
The fact that Hoboken’s parking manager already factored in they’d be 4 hour meters, implys they always expected to add them specifically around the theater. Guess that was a gift, or maybe a way to appease esidents who would be forced to use them too.

I wonder if the proposed meters were ever a factor in the minds of the theater’s developers beforehand? It’s kind of mentioned by one of the council members.

Theater tickets should be the only ones to worry about.

Radio ad is at http://www.youtube.com/watch?v=ObUIc40Eh-k

the ad is also found on clearview’s hoboken website too.

The main auditorium is beautiful, much bigger than I expected after seeing the rather small lobby. Sound system worked great too. If only the movie itself wasn’t such a dud (“2012”).

Don’t you hate it when movie theatres guarantee that all of the movies showing will be great?

Just want everyone to know that the Clearview Hoboken Cinemas will be showing some great Classics Movies during the months of April and May!

Movies like: The Godfather, Casablana, Citizen Kane, Raiders of the Lost Ark and Jaws!

See you at the Hoboken Cinemas!

Closed since since Hurricane Sandy hit, this theater has reopened: View article

Just got back from a true classic at Hoboken Cinemas: “Psycho”. They’ve been showing lots of great stuff every Saturday and Sunday morning. Too bad there were only 3 other people in the audience besides me.

Possibly the nearest cinema to New York City offering “Tenet,” which reportedly did “fair” business nationally in its holiday weekend debut. Article in The New York Times can be read here

Theatre 1 252
Theatre 2 256
Theatre 3 203
Theatre 4 97
Theatre 5 106
Count is based on fandango.com that showed all the seats and also indicated which is closed off due to social distancing.