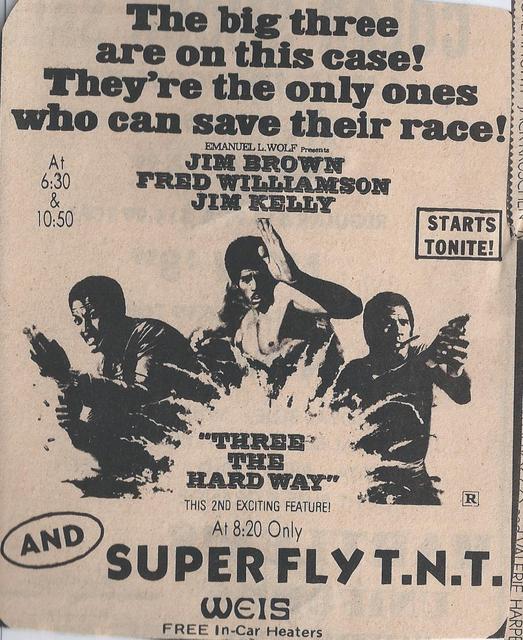 The Weis Drive-In was the last drive-in built in Augusta. It parked 800 cars and was one of the first drive-in theatres to offer 250 free in-car heaters or air-conditioners for the hot humid summer.

It was a beautiful drive-in with a blue coloring at the base of a very nice screen. The concession and booth were painted white with blue trim. The projection equipment was the most modern for a 1966 drive-in.

Bill Barkley said in a Metro Spirit Interview that they once booked "2001: A Space Odyssey" along with a second feature. The Weis policy was to play the first feature again following the second feature. This was in the summer so with all the intermissions and 2001 being nearly 3 hours, the sun was almost coming up when the end credits hit the screen.

He also said that once management had decided to run adult films such as “Midnight Cowboy" and "What Do You Say To A Naked Lady" (tame by our low standards today) the union pulled out.

The Weis would also play all-night horror movies. They once played all five “Planet of the Apes” films calling it in the ads "Go Ape!"

Towards the end it was sold to Georgia Theatres and it went downhill quick! Projectionist John Bugg lamented, "no one cared; it was bought for future real estate". In a Metro Spirit interview he said, "it got to the point where they were told to drop reels so everyone could go home earlier!"

I saw "Jeremiah Johnson" there along with "True Grit" "Return of the Dragon" and "Serpico". The horrible Raquel Welch X-rated movie, "Myra Breckinridge" played there and had thousands show up to see it causing a traffic back up on U.S. 25.

The Weis was the last drive-in to close in Augusta.

John Bugg, Projectionist told me this story, one night after closing, the manager, who John said was on “THE CRAZY SIDE"saw a car slip in.The manager went out on the lot to the car, fired a handgun in the air, scared the you know what out of three boys,hogged tied them in the back room of the concessionstand,until the movies ended. TRUE story,Can’t make this up, guys.

Know those towering steel forms and the white Weis scipt over chocolate backround very well! First experience I remember at Weis drive-in was mom treating wee me and the family dog to our first drive-in movie. So excited but more cozy in the goose down pillows. Also remember finding myself on the abandoned space to snag a smooch (literally) with my college boyfriend between family visits. Looking up “Six Pack Annie” after this post…

Approx. address for this drive-in was 2020 Phinizy Road.

I grew up in this area. This site became a flea market by the 1990s.

talk of a big ampitheatre going there on that site, i don’t see it happening out there…

Nothing just big field of weeds……

I found, by accident, some late 1960’s 8mm footage of the Weis Drive In on Youtube. The Drive in footage starts at 1:03 and runs through 3:15 in the clip: https://www.youtube.com/watch?v=sGEF7C58Vs8. The comments with the video say that their father was the projectionist there.