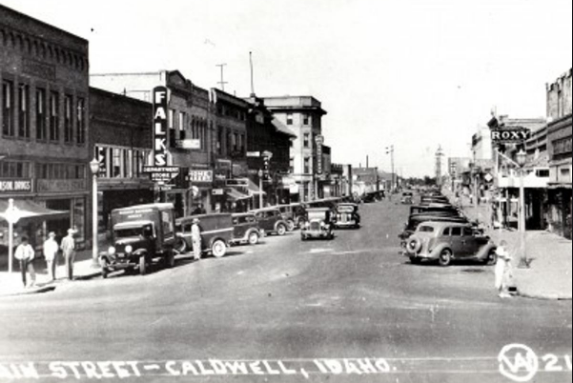 The Roxy Theater dates back to at least 1935. It was listed as (Closed) in the 1941 and 1943 editions of Film Daily Yearbook (owned by Fox Intermountain Theatres chain). Listed in the 1950 edition of F.D.Y. but with no seating capacity given, it was still listed as open in 1955. In its final years of operation in the early-1970’s, it was screening X-Rated movies.

After closing, the building became a furniture store.

The picture shown is the location of the Fox theater, not the Roxy. It was the Fox that later became the Top. The Roxy was located about a block farther east on the same side of the street. The Roxy closed in the early 60’s and became a furniture store.

Ron, the furniture store probably is the location of the Roxy. This pair of photos of Caldwell’s Main Street in 1942 and 2011 shows the Roxy in the 700 block of Main, a few doors west of Kimball Avenue.

Uploaded an early Main Street photos. Roxy signage can be seen on the right.