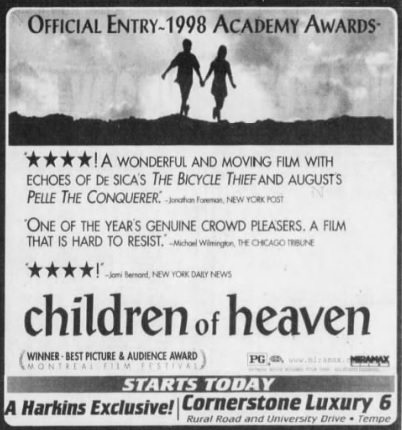 My friends and I visited this theater several times during my college days at ASU. It was walking distance from the dorms (Cholla), and I used to go to the midnite movies many times. I saw Platoon, Batman, Beverly Hills Cop 1&2, Fright Night, etc…during the late eighties and early nineties. When I lived in Tempe, this movie theater, University II on Broadway& Rural, AMC Lakes 6, and a little theater on campus is where I watched the majority of my movies during that time period. I also went to a theater in Los Arcos Mall, too. I remember it because it was Downstairs (like the basement of the mall). Ah, the memories. Today the theater is now owned by ASU.(I think it is used for occasional live theater.)

My friends and I also visited this theater several times during my college days at ASU. The Cornerstone was owned/operated by MANN in the ‘80s.

December 21st, 1984 grand opening ad as Sun Devil 6 in photo section. Renamed Cornerstone 6 when Harkins took over all the Mann theatres in the valley.