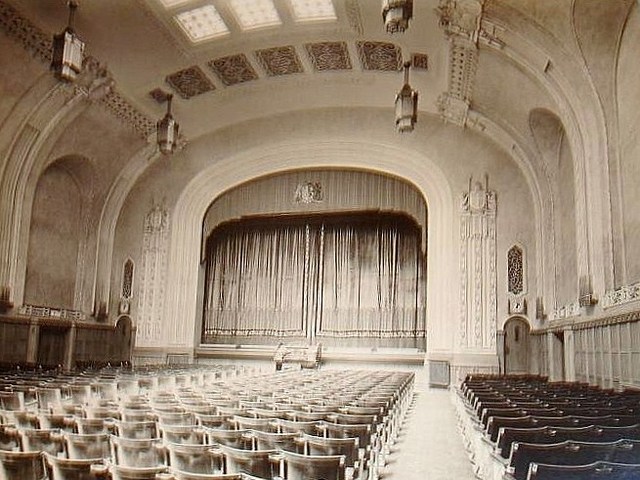 Located in the Rushey Green district of Catford, a district of southeast London. The Catford Public Halls was built in 1932 as part of the Town Hall (since demolished) and was opened on 22nd June 1932 by His Royal Highness Duke of York. With a seating capacity in the main hall for 900 in stalls and circle levels, it was designed for multi-purpose use, mainly concerts and special events. It was also equipped for screening silent films in the main hall and a Compton 3Manual/14Ranks theatre organ was installed to accompany the films.

There are now 845 seats in the main theatre and 102 in the Studio Theatre. Although located at Rushey Green, Catford, the theatre was later, rather confusingly, re-named Lewisham Theatre, as Lewisham is some distance away.

The Broadway Studio was restored and re-opened in May 1987, and in recent years, the main hall has been re-named Broadway Theatre and has been restored. The Compton theatre organ was restored in 1984 by Rushworth & Dreaper, and is now played at special events accompanying silent classic films. In addition to staging live theatre productions, the Broadway Theatre has regular screenings of recent films, and of course today is equipped to screen sound films.

The Broadway Theatre is a Grade II* Listed building.

The larger auditorium “doubled” for that of the Roxy, a cinema supposedly in Oxford, in the episode entitled “Cartouche” of the ongoing British TV series “Endeavour” (the young Inspector Morse). Standing in for the Roxy’s exterior was the former Carlton in London’s Islington, now a church.