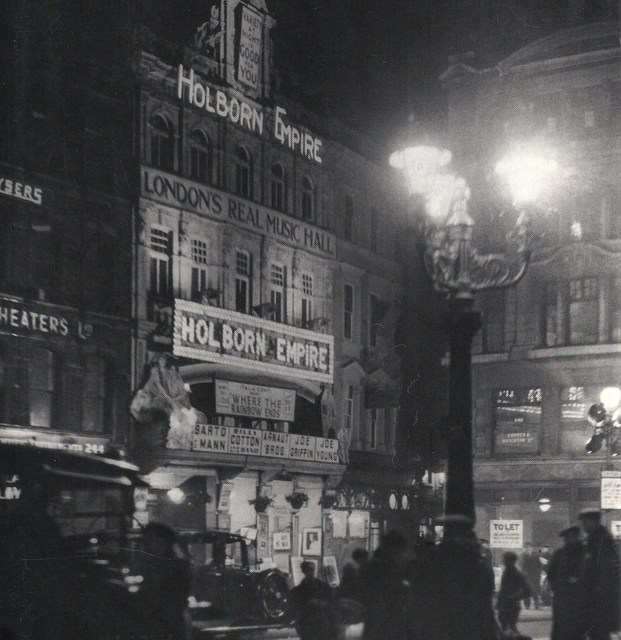 Weston’s Music Hall opened on 16th November 1857 and was designed by the architectural firm Finch Hill & Paraire (William Finch Hill & Edward Lewis Paraire). It was part of the Seven Tankards & Punchbowl Public House. It was a large hall with a capacity of 300 on a single flat floor and balcony slips on three sides. Known as the Royal Music Hall in November 1868 it was rebuilt by the architectural firm Lander & Bedells in 1887 and held 2,500. It became the Royal Holborn Theatre of Varieties in 1892, and noted theatre architect Ernest Runtz designed a new facade for the theatre in 1897. In 1898 Edison’s ‘Life Size Moving Pictures’ were screened as part of the variety bill. It was closed in June 1905 for another rebuilding.

This time famed theatre architect Frank Matcham designed a splendid 2,000 seat theatre now re-named Holborn Empire Theatre. The facade by Ernest Runtz was retained in the new scheme. Seats were provided in orchestra stalls, dress circle (which was at street level) and gallery levels. There were two boxes on each side of the proscenium at dress circle level and two boxes at the rear of the dress circle. The Holborn Empire Theatre opened on 29th January 1906 with a variety programme that included Ruffell’s Bioscope as one of the acts. The theatre was under the direction of Walter Gibbons, followed by Charles Gulliver.

Although it was a music hall/variety theatre, films were being screened as part of the programme by 1914. It came under the an independent company known as Holborn Empire Ltd. in 1925. From March 1928 it was taken over by General Theatre Corporation, who were taken over by Gaumont British Theatres Ltd. two months later in May 1928. It remained in use as a variety theatre and attracted many star names, becoming a No 1 theatre in London, after the London Palladium, with stars such as Gracie Fields and Max Miller appearing frequently.

The Holborn Empire Theatre was badly damaged by German bombs on 11th and 12th May 1941. The front part of the building remained fairly intact, and it was used as a projectionist training centre. In 1946, the building was taken over by the Moss Empires Ltd. chain of variety theatres, who hoped to rebuild and re-open, but due to building restrictions after World War II, this never happened. It was demolished in 1961 and an extension of the adjacent head office of Pearl Assurance Company was built on the site.

Photographs and a more detailed history of the Holborn Empire Theatre here:
http://www.arthurlloyd.co.uk/westons.htm

What a lavishly decorated facade but how sad this jewel is no more!